You are at:Home»Featured»Could Tesla’s Inclusion In The S&P 500 Catapult The Index Higher? 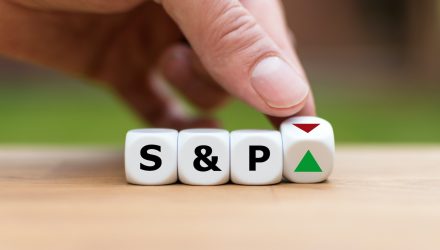 Could Tesla’s Inclusion In The S&P 500 Catapult The Index Higher?

As Tesla stock surged to hit a new all-time high on Monday, increasing the stock’s record run, as investors have made CEO Elon Musk the seventh-richest person in the world, surpassing legendary investor Warren Buffett. Given the company’s outstanding performance, there is now broadening speculation that Tesla will soon join the ranks of the S&P 500.

Tesla closed at an all-time high on Friday, but quickly added another 14% higher on Monday, rapidly targeting $1800 per share. For the year, the stock is up more than 300%. Earlier in July Tesla beat out Toyota to win the title of the largest automaker in the world by market value.
ETFs are benefiting from the moves in Tesla as well, with the ARK Innovation ETF (NYSEArca: ARKK) coming off a second-quarter gain of 62%. The funds’ status as one of the largest holders of Tesla stock is a big reason why the ETF is soaring.

Yet some analysts like Larry McDonald, editor of The Bear Traps Report, feel that Tesla’s spike higher is fueled by investors bidding up shares ahead of the company’s potential inclusion in the S&P 500, and not by true fundamental strength.

“By buying up Tesla TSLA now, front-runners are forcing the S&P Indexes to give the stock a higher and higher weighting,” he wrote in a recent note. “Thus, ETFs / Indexes will be forced to pay up, buying even more shares. Then the hot money exits, leaving indexes holding the bag,” he said.

With earning season starting on Monday, analysts are warning that there is still overhead resistance to be broken on the S&P 500 and that we could still be trading inside of a larger consolidation until that happens.

“The overall rally is still very narrow…and several of the high flying mega-cap stocks are becoming overbought (and more over-valued),” Matthew Maley, chief market strategist at Miller Tabak, said in a note on Sunday. “Therefore, we HAVE to wait to see if the key resistance level on the S&P is indeed broken to the upside before we can confirm that another rally leg in the broad stock market has begun.”

After the S&P 500′s best quarter in more than 20 years, the broad market’s comeback rally has languished amid fears of a worsening pandemic. However, the equity benchmark is now off just 1.4% for the year, sitting roughly 6% below its February all-time high.

However, some analysts like Jeff Saut of Capital Wealth Management see even loftier targets for the index, projecting the bellwether to hit 4000 in the near future.

“The economy is strong. It’s getting stronger. It will drive earnings higher than most analysts expect. And I’ll say it again: people are woefully underinvested. This is a secular bull market and not many of us have been around 50 years to see what a secular bull market looks like. And secular markets tend to last 15 to 20 years. So depending on your starting point, whether it’s October of ’08 or March 2009, this thing could have another 5, 6, 7 years left in it. And nobody believes it,” Saut added.

For investors who are willing to take on more risk to participate in potentially greater upside gains, the Direxion Daily S&P 500 Bull 3X Shares (SPXL) is something to consider.
For more market trends, visit  ETF Trends.