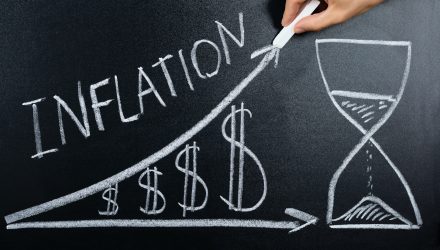 Stocks are rallying higher despite a potential spike in inflation, as evidenced by the Consumer Price Index. Consumer prices excluding food and energy climbed the most in July in nearly 30 years.

While the unexpected increase is a concern that inflation could be ramping up, economists also note that a recovery from the coronavirus recession could be driving prices, rather than the beginning of an inflationary period.

Core inflation, minus food and energy, climbed 0.6%, and currently sits at 1.6% year over year on an unadjusted basis, according to the Bureau of Labor Statistics. That’s the most substantial surge since January 1991, despite the fact that it is still considered to be a relatively low rate that remains under the Fed’s 2% target.

“I don’t think it’s a worry. It’s not going got be on the Fed’s radar screen. They’re just going to take it as an offset of the months of declines. We fell exactly 0.6% over March, April and May,” said Chris Rupkey, Chief Financial Economist at MUFG Union Bank.

Inflation has been a concern for some investors, who have been projecting that the Fed’s loose monetary policy and increase in federal deficits could catalyze inflation by next year. Chairman Jerome Powell said after the most recent Fed meeting that the Federal Reserve was leery of disinflationary pressures.

“Prices are coming back. We’re back to square one,” said Rupkey. “We’re back to seeing where the true trend lies. I don’t think that’s stoking the fires of inflation … The Fed’s opened the spigot here. We’re doing money printing. I would not take this as a sign inflation is back and the inflation genie has escaped its bottle.”

A 5.6% hike in gasoline prices represented about a fourth of the pop in headline inflation, while food prices instead fell by nearly half a percent, the first drop since April 2019. Gasoline is down 20% year-over-year, while food prices are 4.1% higher on the year. The Energy Select Sector SPDR ETF (XLE) is marginally higher amid the news, while the iShares Global Consumer Staples ETF (KXI) advanced 1.61%.

Stocks and index ETFs appeared largely unfazed by the higher inflation reading and moved higher, with the SPY rallying as the S&P 500 looks to challenge its all-time high made in February.

Other analysts like Quincy Krosby, chief market strategist at Prudential Financial, said the jump in inflation is a one-month move and not something to fear unless it becomes a pattern. “You want to see a healthy climb in prices again. It suggests economic activity is picking up. But you don’t want to see a galloping move in prices,” she said.

But Peter Boockvar, chief investment strategist at Bleakley Advisory Group, said the data illustrates that inflation may already be a problem despite best efforts by the Fed.

“If this continues, it will be the Fed’s worst nightmare no matter how many times they say they want higher inflation. Treasury yields are at the highs of the day and while stocks don’t’ seem to care, the inflated areas of the market should,” Boockvar said in a note.

“Own commodity related names, banks, and any company that has pricing power … The world’s level of asset prices have feasted on many years of ever-lower rates and low inflation,” he added. “Just think about the possibility of that regime-changing and invest accordingly. Sorry for the hyperbole but we should all be always assessing the state of things and looking for possible inflection points. Maybe, just maybe, this is one of them.”

For investors looking for ETFs in line with Boockvar’s suggestions, this could mean exploring the Invesco KBW Bank ETF (KBWB) or the SPDR S&P Bank ETF (KBE).