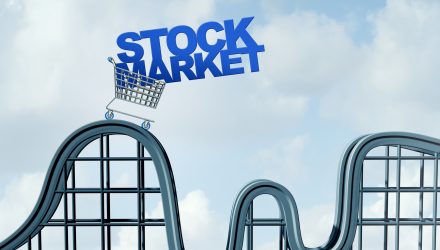 Could Last Year’s Yield Curve Have Predicted This Correction?

U.S. stocks are in the red once again today, with the S&P 500 down almost 12% from its recent highs, signally a move firmly into correction territory. But what exactly does a correction mean for stocks and investor portfolios?

The S&P 500 posted a peak closing price of 3,386.15 on Feb. 19, and is heading for its sixth down day in a row, many of which have exceeded 3%. If the index closes below 3,047.54, its six-day drop would mark its fastest decline into correction territory from a recent top since a two-day drop on Nov. 5-6 2008, during the profundity of the global financial crisis, according to Dow Jones Market Data.

The precipitous fall also saw the S&P 500 dip below its 200-day moving average, according to FactSet, a technical indication that can trigger fierce selling, while a solid move above the average would be a more optimistic sign.

The coronavirus contagion, which is contributing to the panicking markets, has now spread to nearly every continent and is quickly headed towards a pandemic according to the World Health Organization.

Historical charts reveal that market corrections can often go another 3%, needing about four months to recover to prior levels, on average. However, this is only if it does not slip into bear market territory, which marks a move down 20% from a high. If the losses stretch to 20%, then there’s more devastation ahead and protracted recovery time.

The most recent corrections happened from September 2018 to December 2018, when the S&P 500 bounced into and out of correction throughout the end of 2018 before ripping into a bear market (a 20% decline from its all-time high) on Christmas Eve. Bear markets endure 14.5 months on average and have taken roughly two years to recover on average.

One notable event is that last year the yield curve inverted in May, stoking fears of a recession. While these fears abated, there is often a substantial lag between when the yield curve inverts and when a recession occurs, with as much as nearly 2 years in-between, to as little as 8 months. This confuses investors, who likely see everything as stable.

Yield curve inversions “predicted 7 out of 9 recessions during the post-war period. This is a track record any economist would be proud of,” wrote Sung Won Sohn, professor of economics at Loyola Marymount University and president of SS Economics last summer. “If the inversion started today, the economy could be in a recession within a year.”

Only time will tell if this track record continues to be of value.

Investors who are looking for a place to stay invested meanwhile can seek out safety or diversification with investments like gold and emerging market ETFs like SPDR Gold Shares (GLD), iShares Currency Hedged ETF (HEEM) or the iShares Emerging Market ETF (EEM).