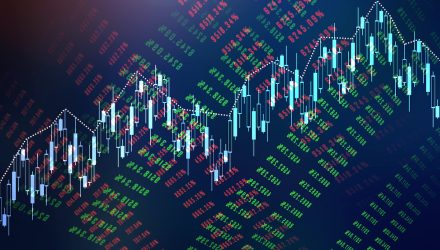 Could Index ETFs Have More Gas In The Tank?

While stock futures were pummeled in overnight trading on Wednesday and continued to drop steeply on Thursday in what has been a mixed week of trading, some analysts now feel that the most dismal U.S. GDP since World War II might actually trigger stock gains.

Stocks sold off after data revealed that GDP sank by a record 32.9% in the second quarter. The figure was disappointing, but economists surveyed by Dow Jones had projected a 34.7% decline.

After a predictably somber and nebulous economic report from Federal Reserve Chairman Jerome Powell on Wednesday, some investors and analysts are contemplating whether markets would rejoice in data that may result in additional stimulus in the future. Thus far that theory does not seem likely as the data is out and stocks fell on what is also an important day for earnings, with several major technology companies reporting.

But Andrew Garthwaite, Credit Suisse’s global equity strategy analyst, feels that the S&P 500 could “easily hit 3,500 on our models” by the end of 2021. “The key to me is do you get a big correction? Do you get a fall of more than 10%? I don’t think so and the key is whether you want to buy into dips or sell into rallies and we want to buy into dips,” he told MarketWatch. The SPDR S&P 500 ETF Trust (SPY), which tracks the benchmark index, is still down on the day Thursday.

Garthwaite believes that investors should look at this as an opportunity to buy dips and get on board the uptrend in stocks because, “We’re going to get a combination of easy money, easy fiscal, with yield curve control — i.e. fiscal QE [quantitative easing]— until unemployment returns to politically acceptable levels.”

Furthermore, Garthwaite sees real bond yields, which include 10-year Treasury inflation-protected securities that have been tumbling based on coronavirus fears, are headed to minus 2%, despite what Chairman Powell has said to the contrary. “Why do you own a bond if it’s a non-diversifying return-less risk? As a result of that, we’ve seen flows into equities hold up abnormally well,” he says.

Although the analyst is bullish on stocks, he does acknowledge that there is a concerning disconnect between earnings revisions and equities, as well as credit spreads that suggest an extremely low default rate for companies, which could be problematic for stocks.

Garthwaite also sees a potential problem for tech stocks, which have led the way tot gains this year, as the Vanguard Growth ETF(VUG) and Invesco QQQ Trust (QQQ) have had a banner year.

“I think the way you’re going to get a major rotation would be if there were in response to a strong economic recovery, a sharp rise in bond yields or a major change in policy from the Fed on interest rates, and I don’t see that,” says the strategist.