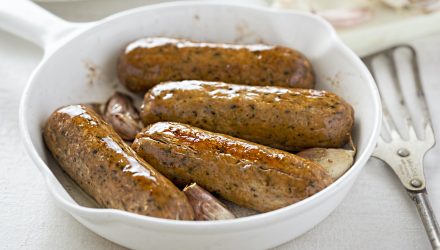 The US Vegan Climate ETF (VEGN) is climbing amid news that privately held company Impossible Foods announced Monday that its meatless sausage will now be for sale to restaurants nationwide.

A number of major retail locations in the United States are already selling The Impossible Sausage, including Restaurant Brands International’s Burger King and Starbucks, but the company is allowing other major chains and independent restaurant owners to list the meat-free sausage on their menus.

Of course, the meatless alternative faces competition in the marketplace. Impossible’s rival Beyond Meat has already been selling its own meatless sausage in grocery stores and at restaurants, including Dunkin’ donuts. Other food companies, like Kellogg, also sell their own sausage meat alternative.

Impossible’s meatless sausage, which was inaugurated earlier this year, is its first new product since the company launched the Impossible Burger to great acclaim back in 2016.

With the number of cases beginning to spike once again, the coronavirus pandemic has generated an interest in buying of plant-based meats, as consumers struggle to remain healthy in the wake of this devastating pandemic. In the 16-week period ended June 20, retail sales of fresh meat alternatives had soared 218% compared to the year-ago period, according to Nielsen data.

The trend has sparked interest in the health food sector as well. However, shares of Beyond Meat were down 8% in afternoon trading Monday after Barclays cut its rating. Beyond Meat however, has had a stellar year so far, and with a market value of $8.03 billion, is up 70% so far this year.

While Impossible Foods is not available for public investment, ETF-investors looking to participate in the sector can look into the Invesco Dynamic Food & Beverage ETF (PBJ), the First Trust Nasdaq Food & Beverage ETF (FTXG), the Renaissance IPO ETF (IPO), as well as the above-mentioned US Vegan Climate ETF (VEGN), which “excludes companies engaged in animal exploitation, defense, human rights abuses, fossil fuels extraction and energy production, and other environmentally damaging activities” according to the fund’s prospectus.