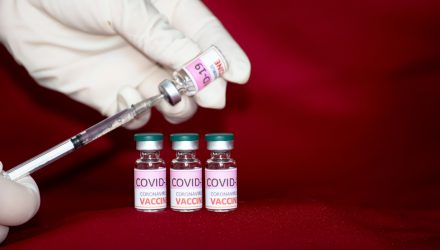 Could Biotech ETFs Get Another Boost From JNJ News?

This has been a pivotal week for biotech news, as Johnson & Johnson said Wednesday that a booster shot of its COVID-19 vaccine generated a promising immune response in early stage clinical trials. This follows the Monday news that the FDA fully approved the Pfizer and BioNTech COVID-19 vaccine, making it the first vaccine in the U.S. to be awarded such a designation beyond emergency use.

J&J’s current vaccine requires only a single dose, whereupon recipients are considered fully vaccinated 14 days after receiving the injection, making it potentially more convenient, though somewhat less effective in clinical trials than the other vaccine candidates. J&J announced Wednesday that vaccine trial participants between ages 18 and 55, who received a booster dose of the shot after taking the single dose injection, created virus-fighting antibodies “nine-fold higher” than those observed after a month following only a single dose.

“We have established that a single shot of our COVID-19 vaccine generates strong and robust immune responses that are durable and persistent through eight months,” Dr. Mathai Mammen, head of research and development at J&J’s Janssen vaccine arm, said in a statement.

“With these new data, we also see that a booster dose of the Johnson & Johnson COVID-19 vaccine further increases antibody responses among study participants who had previously received our vaccine,” he added.

The FDA first granted Emergency Use Authorization for a COVID-19 vaccine via the Pfizer vaccine back in December. Amid the drive to get America vaccinated, over 204 million Pfizer shots have been given, based on data gathered by the Centers for Disease Control and Prevention. The Moderna and J&J followed shortly after, with J&J rolling out in March.

J&J was unique, in that it was a single does injection and had less stringent storage requirements than the competing vaccines.

The J&J vaccine can be stored in normal refrigerators, while the Pfizer and Moderna vaccines need to be stored at sub-freezing temperatures.

In its trials, J&J said its vaccine was 85% effective at hindering severe illness and 100% effective at preventing hospitalizations and deaths 28 days after individuals were vaccinated.

“It’s important to remember about the Johnson & Johnson vaccine is we did the clinical trials roughly from October 2020 to January of this year and it was really during the peak of the incidence rate of this virus,”Alex Gorsky, CEO of Johnson & Johnson explained.

The rollout was not without incident, however, as the J&J vaccine was paused for issues with clotting in some women a short time after use began.

“I think the decision was a very pragmatic one, and a very transparent one, a very clear one, and a correct one,” said Naor Bar-Zeev, a statistical epidemiologist at Johns Hopkins Bloomberg School of Public Health. “It’s a real risk and it’s a serious event if it occurs. But it’s very unlikely to occur.”

“Had we had an endless supply of any vaccine, then of course it would be ideal for younger women to receive vaccines that have not been found to be associated with clotting,” Bar-Zeev said. “But in the absence of that reality it is still the right decision for any given woman who is considering her own risk benefit-risk balance.”

The full FDA approval of the Pfizer vaccine and the J&J booster news arrive at a critical time, as the number of coronavirus infections has been ramping up across the nation.

“We’re in the middle of the summer, people are gathering again with people, they’re in large groups, the vaccine has given a false sense of security in some ways to people, and they forget,” Dr. Perry Halkitis, dean of the Rutgers School of Public Health, told CNBC in an interview.

While the new J&J data is exciting, the company’s press release did not discuss the booster shots’ potential impact on the more transmissible Delta variant of the coronavirus, or on safety in general.

A July report demonstrated that a single shot of the J&J vaccine provides immunity that lasts at least eight months and appears to deliver adequate protection against the rapidly-spreading Delta variant, however.

The Centers for Disease Control and Prevention has mentioned that J&J recipients will likely need a booster dose, but it has insufficient information right now to support a formal recommendation.

The company also said on Wednesday that it is communicating with the FDA and other health regulators regarding booster shots.

The fresh research arrives shortly after J&J announced that CEO Gorsky was leaving his post after nine years to become executive chairman.

For investors, the vaccine approval and booster news could be especially significant for biotech ETFs as well.

The Defiance Nasdaq Junior Biotechnology ETF (IBBJ) is up over 4% on Monday, for example.

Finally, the Invesco Dynamic Biotechnology & Genome ETF (PBE) is another ETF that is over 2% higher on Monday.

PBE is part of the suite of Dynamic ETFs from PowerShares, using quant-based screening to identify component companies that may be poised for outperformance relative to a broad-based universe.

For investors looking to trade biotech stocks using ETFs, there is some support from analysts as well.