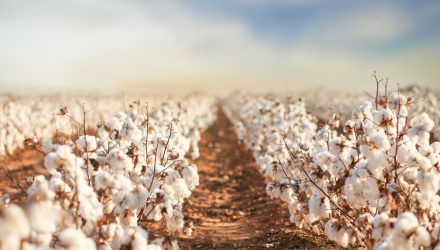 Cotton prices and a related exchange traded note have surged over the past month as drought conditions decimate crops, with the latest harvest expected to be the smallest in 13 years.

According to the United States Department of Agriculture’s latest crop production report, the U.S. cotton harvest will come in at around 12.57 million bales, or the smallest since 2009, with Texas, the largest cotton-producing state, accounting for the almost 5 million bale shortfall in production year-over-year.

U.S. agricultural market watchers warned that the ongoing drought across the U.S. could cause farmers to forgo 40% of 12.5 million acres of farmland, with cotton harvests at their smallest acreage since the Reconstruction Era, or 1868, the Wall Street Journal reported.

Some areas of the U.S. are suffering through the hottest weather on record, which has dried up farm fields, causing farmers to call it quits as it is no longer economically feasible to sustain some farmlands.

For example, farmer Brent Nelson in the Texas panhandle is only using 280 of his 5,000 acres of land. He noted that his fields only saw about 3 inches of rain since last August, compared to an average of about 17 to 18 inches of rain annually.

Consequently, more farmers are abandoning crops and relying on federal crop insurance to sustain themselves.