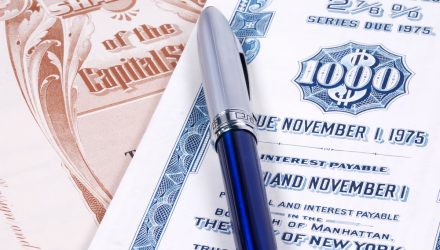 Corporate bond exchange traded funds were among the most popular ETF plays of the second quarter after the Federal Reserve embarked on an unprecedented corporate debt purchasing program.

As part of its efforts to support credit markets and bolster liquidity in the midst of the coronavirus pandemic, the Fed began purchasing corporate bonds and even corporate debt-related ETFs on May 12.

“Now that they have SMCCF up and running, they will reduce their run rate on ETFs to make sure they have powder available in case they need it,” Peter Tchir, Academy’s head of macro strategy, told Bloomberg. “They will grow the bond side faster than the ETF side for now.”

However, not everyone is amenable to the idea of the Fed owning large chunks of the corporate bond market.

“It does sort of make you wonder if it makes sense for them to be buying bonds of Apple. Spreads are so tight and stocks are doing so well. You wouldn’t think they would need support from the Fed,” Kathy Jones, director of fixed income at Charles Schwab, told CNBC. “The reasoning I guess makes sense. But when you look at the outcome, you scratch your head and wonder whether this is where we need the money to go.”