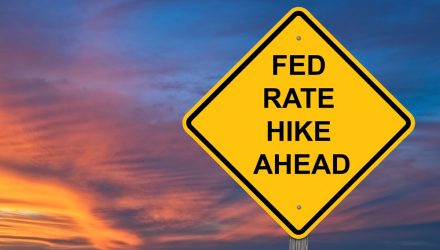 Most investors now believe that the Federal Reserve implementing its third consecutive rate hike of 75 basis points when it meets later this month is practically a certainty. After Fed Chairman Jerome Powell said that increases will continue and higher rates will likely stay in place, CNBC is reporting that the CME Group’s FedWatch Tool placed the probability of a three-quarter point hike to 82% on Wednesday morning.

In his speech during the Fed’s annual retreat in Jackson Hole, Powell said the central bank will need to go beyond the neutral rate, and that restrictive policy is needed to quell record-high inflation.

“We are moving our policy stance purposefully to a level that will be sufficiently restrictive to return inflation to 2%,” said Powell, adding that “restoring price stability will likely require maintaining a restrictive policy stance for some time. The historical record cautions strongly against prematurely loosening policy.”

Fixed income investors nervous about rising rates can mitigate risk by limiting exposure to potential increases. This can be done by shortening duration. The Avantis Short-Term Fixed Income ETF (AVSF) is an actively managed fund that invests primarily in investment-grade quality debt obligations from a diverse group of U.S. and non-U.S. issuers with shorter maturities.

“Securities may include those issued by corporations or governments and their agencies, instrumentalities, or sponsored corporations including supranational organizations,” according to VettaFi. “The portfolio selection seeks bonds with high expected returns through a process that uses an analytical framework, which includes an assessment of each bond’s expected income and capital appreciation.”

The portfolio managers for AVSF organize the fund’s universe into component groups based on industry sector, credit rating, duration, country, and currency. They then calculate the expected return implied by each component group’s yield curve while considering valuation metrics like duration and option-adjusted spreads.

AVSF, which has an expense ratio of 0.15%, aims for a three-year average maturity. The fund may also invest in credit default swaps and total return swaps.