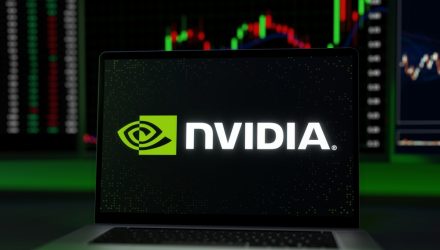 Invest in Some Quality Growth Funds (Like Nvidia) With These ETFs

Nvidia Corp.’s share price dropped after the Santa Clara, CA.-based chip maker warned that its second-quarter sales would be far lower than its previous forecast. Nvidia expects revenue of $6.7 billion for the quarter ended July 31, 17% below Wall Street expectations of $8.12 billion.

Nvidia shares dropped 6.3% to $177.93. The stock has declined roughly 40% this year amid a broad selloff in chip-company shares.

CEO Jensen Huang is quoted in the Wall Street Journal as saying that gaming revenue declined significantly as the quarter progressed and the company is adjusting prices and inventory levels in response. Demand for chips from gamers surged at the height of the pandemic, but now that demand has waned.

“As we expect the macroeconomic conditions affecting sell-through to continue, we took actions with our Gaming partners to adjust channel prices and inventory,” said Huang, referring to an arrangement where Nvidia’s chips are sent to third-party manufacturers who then put them on circuit boards and sell them to consumers.

Still, fundamentals for the company remain solid, and it’s still the largest listed chip maker in the U.S. in terms of market value. Those wanting to scoop up some shares of Nvidia (like Cathie Wood) and other growth stocks at low prices through the tax efficiency of an ETF wrapper may want to consider the American Century Focused Dynamic Growth ETF (FDG) and the American Century STOXX U.S. Quality Growth ETF (QGRO), both of which include the company among their holdings.

FDG seeks long-term capital growth through investments in a focused number of large- and mid-capitalization U.S. growth stocks. The fund uses a high-conviction strategy designed to invest in early-stage, rapid-growth companies with a competitive advantage, high profitability, growth, and scalability to sustain their leading positions.