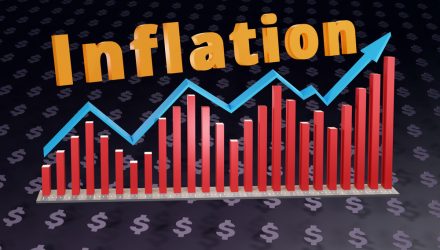 The personal consumption expenditures index, which the Federal Reserve looks at to gauge inflation, rose 3.5% in June year-over-year, or slightly below economists’ expectations of 3.6%, CNBC reports. The core PCE index was also up 0.4% month-over-month, compared to the 0.6% Dow Jones estimate.

The June reading “was the second consecutive deceleration in the [month-over-month] pace of core-PCE – consistent with the notion that inflation might have peaked for the time being,” BMO Capital Markets’ Ian Lyngen said in a note.

While the month-over-month numbers are edging lower, the PCE price index’s 3.5% rise over June was still the biggest jump since 1991.

“Today’s report was still a big number even though it was lower than investors’ expectations. It will be at least the fall before we really know how transitory inflation is. Our view earlier in the year was that rates were rising too far, too fast. We’ve likely overcorrected to the downside, for now,” Jason Blackwell, chief investment strategist at The Colony Group, told CNBC.

“There are so many crosscurrents going on at the moment influencing markets,” Sebastian Mackay, a multiasset fund manager at Invesco, told the Wall Street Journal. “We’ve entered a more volatile period for markets, but markets will continue to move higher because we’re still seeing economic growth.”

Investors looking to strengthen their fixed income strategies can consider the Avantis Core Fixed Income ETF (AVIG), which invests in a broad set of debt obligations across sectors, maturities, and issuers. AVIG pursues the benefits associated with indexing, such as diversification and transparency of exposures. Yet, the fund also has the ability to add value by making investment decisions using information embedded in current yields.

Additionally, the actively managed American Century Diversified Corporate Bond ETF (NYSEArca: KORP) invests in U.S. dollar-denominated corporate debt securities issued by the U.S. and foreign entities but may also hold securities issued by supranational entities. Up to 35% of the fund’s net assets may be invested in high-yield securities or junk bonds. The fund may also invest in derivative instruments such as futures contracts and swap agreements. The weighted average duration of the fund’s portfolio is expected to be between three and seven years.