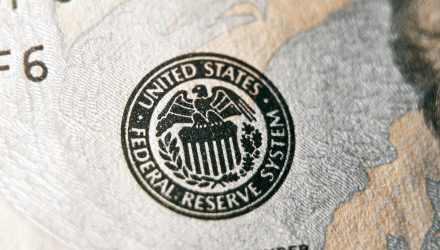 Bond exchange traded funds strengthened on Friday, with U.S. Treasury yields higher as investors sold off risk and positioned for the Federal Reserve meeting next week.

The Federal Reserve meets for two days next week and is expected to provide further details on Wednesday regarding when it could start to taper its $120 billion in pandemic-era monthly bond purchases that have supported the economic recovery so far.

Fed Chief Jerome Powell previously stated that the tapering could happen this year, but he has not provided any specifics. Investors hope to see more clarity from the Fed over the scheduling for reduced asset purchases, which should also provide a hint as to when the next rate hike could occur.

The Fed is also expected to tie in any policy decisions to U.S. job growth in September and beyond, Reuters reports.

Along with the Fed’s two-day meeting ending on Wednesday, the central banks of China, Japan, Sweden, Brazil, the United Kingdom, and Turkey will meet next week to discuss monetary policy as well.

“My sense is that nobody really wants to be particularly aggressively positioned” going into next week, Guy LeBas, chief fixed income strategist at Janney, told Reuters, adding that the Treasury market was “slowly bleeding out the CPI rally” that took yields to three-week lows earlier in the week.

Americans’ expected inflation rate rose in September compared to the previous month according to a preliminary reading of the Michigan consumer-sentiment index, the Wall Street Journal reports. For the next year, consumer prices are now projected to rise 4.7% compared to expectations of a 4.6% rise in August.

Investors looking to strengthen their fixed income strategies can consider the Avantis Core Fixed Income ETF (AVIG), which invests in a broad set of debt obligations across sectors, maturities, and issuers. AVIG pursues the benefits associated with indexing, such as diversification and transparency of exposures. However, the fund also has the ability to add value by making investment decisions using information embedded in current yields.

Additionally, the actively managed American Century Diversified Corporate Bond ETF (NYSEArca: KORP) invests in U.S. dollar-denominated corporate debt securities issued by U.S. and foreign entities but may also hold securities issued by supranational entities. Up to 35% of the fund’s net assets may be invested in high-yield securities or junk bonds. The fund may also invest in derivative instruments such as futures contracts and swap agreements. The weighted average duration of the fund’s portfolio is expected to be between three and seven years.