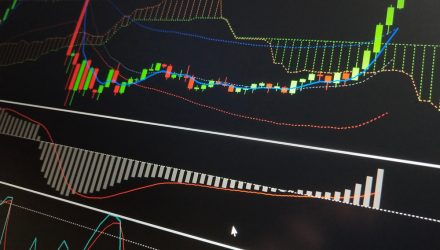 Bond exchange traded funds strengthened on Thursday as investors continued to trim back on risk assets, with the S&P 500 dancing around a correction territory for the fourth consecutive session.

While U.S. equities surged in early Thursday trading off the backs of heavy selling in response to the Federal Reserve’s announcement in the prior session, stock markets lost the gains through the day on concerns over the central bank’s policy outlook, inflation, and geopolitical risk over Russia.

Yung-Yu Ma, the chief investment strategist at BMO Wealth Management, warned that the ongoing volatility reflects difficulties in not only responding to the Federal Reserve’s plans for monetary policy but in prepping for a long-term change in that policy, the Wall Street Journal reports.

“What gets priced in and when is difficult at this point,” Ma told the WSJ. If inflation comes down quickly on its own, that will release some pressure. If it doesn’t, and the Fed has to be aggressive in fighting it, “that’s going to take its toll on the market.”

The Fed has signaled that it will begin hiking interest rates in mid-March as expected, but traders also noted Chairman Jerome Powell’s hawkish tone that reflected the central bank’s intentions to fight inflation.

Mark Grant, a strategist at B. Riley Securities, argued that the inflation point is important, but the Fed did not provide clarity for the market on how it plans to tackle inflation.

“This continuing uncertainty with the Fed is overshadowing the economy,” Grant told the WSJ. “Everybody’s sitting around trying to figure out what to do.”

Investors looking to strengthen their fixed income portfolios can consider the Avantis Core Fixed Income ETF (AVIG), which invests in a broad set of debt obligations across sectors, maturities, and issuers. AVIG pursues the benefits associated with indexing, such as diversification and transparency of exposures. However, the fund also has the ability to add value by making investment decisions using information embedded in current yields.