You are at:Home»Core Equity Channel»What Does The Phase One Deal Mean For Stocks And Commodities? 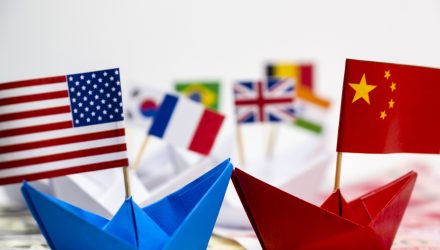 What Does The Phase One Deal Mean For Stocks And Commodities?

U.S. and China trade representatives are set to complete a saga of fierce bilateral negotiations on Wednesday with a “Phase One” deal that asserts billions of dollars’ worth of agricultural purchases and the start of reforms to China’s ongoing practice of compulsory technology transfer.

The trade deal, which had reached an impasse around Thanksgiving, raised fears that an accord would collapse again, dragging stocks and hopes for a halt to the nearly two-year-old trade war with it. But then just days later, President Trump announced that a deal would be signed in January, sending the market on a solid upward trajectory that was aided by the holiday season.

Markets have already rallied since President Donald Trump announced the deal in the Oval Office last month. The iShares MSCI China ETF (MCHI) has climbed almost 9% over the past month, compared with a more modest 3.2% gain for the S&P 500.

Aside from stocks, investors like futures traders are also concerned about the impact of a deal, which is predicated on a significant agricultural purchases from Beijing.

P.J. Quaid, a corn-options broker at the CME Group in Chicago, said he’s ready to understand how the White House intends to enforce the tenets of the Phase One deal if China tries to shirk its commitments.

“This thing’s been a crazy roller coaster since it started. A lot of people have become pessimistic because a lot of the purchases they said they’re going to make seem hard to attain,” Quaid said. “If this thing comes in under expectations, you could see sell-off. It’s been a rough time for people trading Ags.”

“We’re anticipating $35 billion [of farm purchases]the first year and $40 billion in the second,” he said. “It doesn’t look like we’re creating any new world demand.” But unresolved, Roose said, is whether the Chinese will actually commit to buying more U.S. farm goods than before President Donald Trump opened the trade spat nearly two years ago.

Despite concerns, Roose said he was a bit more sanguine with a “Phase One” deal nearly signed.

“There’s always a question mark, but if they want to get to ‘Phase Two,’ they’re going to have to show some solid follow-through,” he said.

The Invesco DB Agriculture ETF (DBA), which is the top fund in the agriculture industry category by assets, could be a vehicle to consider for investors seeking to play the agricultural move that may come from a successful trade deal.

For now though, investors will have to hold their breath to see if this time is the time for action, or simply more posturing and postponing.