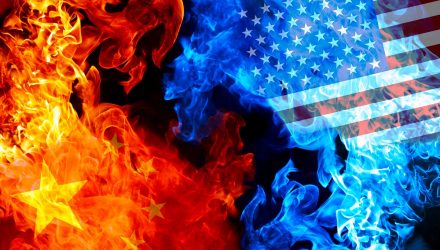 U.S. stocks opened dramatically lower on Monday, giving back all of the gains from a strong turnaround in the previous session, and reaching their lowest levels since March, after China decided to raise tariffs on some U.S. goods, as the ongoing trade war between the world’s largest economies exacerbates.

As of noon ET, the Dow Jones Industrial Average is off by roughly 2.5%, and over 600 points, while a sizable selloff in the tech sector drove the S&P 500 down by 2.3%. The Nasdaq Composite plummeted the most, down 3.2%. All of the majors indices continue their fall.

President Donald Trump tweeted on Monday that Beijing will be “hurt very badly if you don’t make a trade deal, ” recognizing that business would be required to leave the country without an agreement. The president also stated that China had a “great deal” almost finished but then they “backed out.”

I say openly to President Xi & all of my many friends in China that China will be hurt very badly if you don’t make a deal because companies will be forced to leave China for other countries. Too expensive to buy in China. You had a great deal, almost completed, & you backed out!

With the markets having made record highs recently, and now off by more than 5%, analysts are weighing in on the current state of the market, and the likelihood that this selloff could perpetuate.

“The market was bracing for a really big event and last week we got it,” said James Masserio, head of equity derivatives trading in the Americas at Societe Generale. He noted investors had been loading up on downside protection ahead of last week’s move. After Monday’s news, however, we could see volatility being bid up “even higher.”

“Volatility is going to persist. People don’t know what to make of it,” said JJ Kinahan, chief market strategist at TD Ameritrade. But “this is more of a re-evaluation of stocks than it is a pure panic. Bonds have rallied over the last couple of weeks, but if this was a panic you’d see people coming a lot more for bonds.”

Currently there are no clear plans for when the U.S. and Chinese representatives will meet again to discuss trade issues.