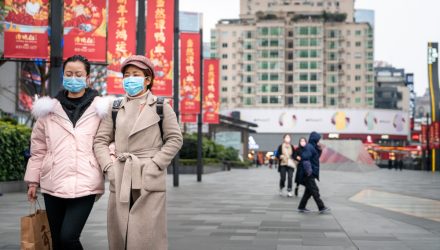 U.S. markets and stock ETFs tried to maintain their momentum Tuesday on optimistic forecasts that the coronavirus outbreak could be contained with a few months, alleviating some of the uncertainty surrounding the contagion.

The World Health Organization, or WHO, called the Chinese coronavirus a “very grave” international threat, but China’s foremost medical adviser on the outbreak argued the crisis could be over by April, Reuters reports.

“It feels as though the market is nervous but it keeps moving higher,” Robert Pavlik, chief investment strategist and senior portfolio manager at SlateStone Wealth LLC, told Reuters.

“The concern of not being in this market is outweighing the risk of being in the market,” Pavlik added. “People are nervous but they’re more nervous about not making the returns and sitting on the sidelines.”

In addition, investors are “fully convinced that the Chinese government will step in to do, to quote Mario Draghi, whatever it takes” to support the domestic economy, Altaf Kassam, head of investment strategy for EMEA at State Street Global Advisors, told the Wall Street Journal.

The markets, though, slipped toward the end of the session on Tuesday after investors digested the updates out of the Federal Reserve. U.S. Fed Chair Jerome Powell began his semiannual economic update before congress where he reiterated that the economy, in its 11th year of an expansion, remains “resilient”. However, the central bank noted potential risks, such as the coronavirus, which has the potential to disrupt the global economy.

While “some of the uncertainties around trade have diminished recently,” the viral outbreak “could lead to disruptions in China that spill over to the rest of the global economy,” Powell said Tuesday before the House Financial Services Committee.