You are at:Home»Core Equity Channel»U.S. Stock ETFs Bounce on Hopes of Monetary Stimulus 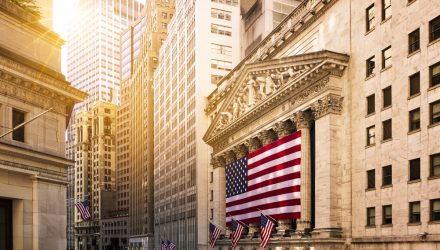 U.S. markets and stock ETFs jumped on Monday, paring some of last week’s steep losses on hopes that global central banks will implement accommodative measures to cushion the fallout from a spreading coronavirus outbreak.

Investors shifted to a more risk-on attitude on bets that the Federal Reserve and other major central banks could cut interest rates to counteract a potential weakening economy in face of the virus outbreak.

Some may also be making an opportunistic bet after U.S. stock markets experienced their worst week since the financial crisis Friday, dipping into correction territory amid fears of a recession stemming from a potential global pandemic.

“The selloff was so fierce last week that you do have some buy-the-dip investors emerging,” Brent Schutte, chief investment strategist, Northwestern Mutual Wealth Management Company, told Reuters, adding that volatile action was based on how the virus was appearing to impact the economy.

However, the precipitous drop, along with data that revealed Chinese factory activity slowing to its worst pace ever in February, fueled bets of central bank stimulus to bolster growth. Market participants are now betting on a 50 basis point rate cut when the Fed meets in mid-March.

“We continue to believe that stimulus will actually take hold and push the economy higher as the impact of the coronavirus (will) likely dampen over the longer term,” Schutte added.

Other global central banks also showed interest in combating a potential slower growth outlook. For instance, the Bank of Japan joined the Federal Reserve in pledging to take action in response to the coronavirus epidemic, the Wall Street Journal reports.

A senior official at the European Central Bank also stated the ECB could further cut interest rates into negative territory and start another round of bond purchases to support the Eurozone economy.