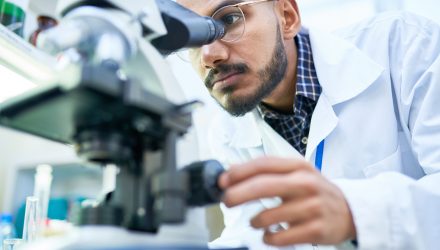 The iShares Nasdaq Biotechnology ETF (NASDAQGM: IBB), the largest biotech exchange traded fund by assets, and other biotech ETFs are surging to start 2019, but some market observers advise exercising caution with the high-flying group.

Deal-making in the biotech space has heated up as more companies look to acquire others to expand on product lines. For example, Bristol-Myers Squibb said it would buy Celgene in a $74 billion deal. Eli Lilly also completed another deal related to cancer treatments in June when it closed a $1.6 billion deal to buy out Armo Biosciences.

“The group of stocks has been bolstered by a flurry of unexpected mega-deals in the space as of late, including Bristol-Myers scooping up Celgene for a whopping $74 billion and Eli Lilly’s $8 billion deal for cancer gene therapy company Loxo Oncology,” reports CNBC.

Healthcare stocks are also showing attractive valuations relative to other defensive sectors, which are richly valued. Biotechnology historically trades at multiples that are elevated relative to broader benchmarks, but after last year’s of struggles for biotechnology names, some analysts see value with some big-name biotech stocks

“But Newton Advisors technician Mark Newton says investors might want to wait a bit before getting into biotech, saying the sector’s rapid run may be a little too extreme,” according to CNBC. “He points out that since August, the once-battered sector has actually regained about half of its losses, which is ‘good on an intermediate basis.’ However, he encourages investors to wait for a dip before buying.”