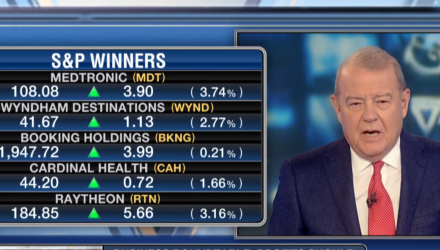 In discussing these ETFs, Lydon explained how big-box retailers are in a downturn, with 8,000 stores closing this year alone. He said investors who believe this trend will continue can look to the ProShares Decline of the Retail Store ETF (EMTY), which sells short on big box retailers such as Barnes & Noble (NYSE: BKS) and The Gap (NYSE: GPS).

Another hot fund to go with the changing trends in retail is the ProShares Online Retail ETF (ONLN), which is a pure-play online retail ETF that includes companies like Amazon (NASDAQ: AMZN) and GrubHub (GRUB).

“If you really want the best play, it’s [ProShares Long Online/Short Stores ETF] CLIX, which is long online, but is actually short the big box – the retailers that are closing. That’s up 25% year-to-date,” Lydon notes, adding how strong a strategy it has been for the fund.

With big-box retailers down and online retailers up, putting them together has led to success for CLIX. Keeping that in mind, Lydon made it clear that while online selling is up 13% so far this year, online sales only make up 11% of total retail sales.

“That’s mind-boggling because, I don’t know about you, but Amazon packages keep showing up at my house every single day,” Lydon said. Perhaps not too unbelievable though, as two major retail chains posted their Q2 earnings, which were higher than expected estimates.

How Are Big Box Retailers Doing

According to CNBC on Tuesday, Home Depot (NYSE: HD) shares climbed more than 3%, following the release of their mixed Q2 earnings report. This is, in part, due to earnings topping the estimates made by analysts.

Although, Q2 sales did come short of expectations, with the future outlook in question due to the trade war. Still, earnings per share are said to be on the rise, even if it’s a slow growth for the year.

At the same time, Kohl’s Corporation (NYSE: KSS) was in a reasonably similar position. Once again, as reported by CNBC, Kohl’s shares jumped up a bit, compared to expectations. This is thanks to back-to-school sales and a new partnership with Amazon (a thematic bit of irony, all things considered).

Still, while there was a steady growth of sales, falling short of expectations has led to Kohl’s trimming its full-year revenue outlook, partially due to concerns about tariffs.