You are at:Home»Core Equity Channel»Tom Lydon on ETF Edge: Earnings Growth Versus Buybacks 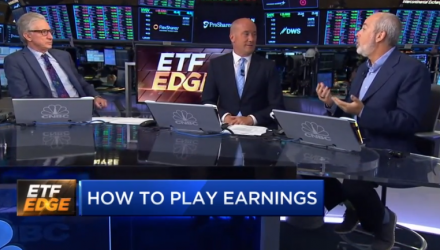 With earnings season again underway, experts consider how various ETFs have performed against the S&P 500. ETFs like the WisdomTree US Earnings 500 ETF (EPS), which seeks to track the price and yield performance, before fees and expenses, of the WisdomTree U.S. LargeCap Index, offer investors a chance to participate in earnings-generating companies within the large-capitalization segment of the U.S. Stock Market.

“We’ve had a 10 year bull market in stocks, so the S&P has done quite fine. It’s really been tough to beat. But going forward I think making an index a little more disciplined is a great idea. So now is the time to look at those types of disciplines. And when you look down below large caps, and look into mid-caps and small caps, that’s where we’re really gonna see the difference. So, Wisdom Tree has a whole suite of ETFs that has that strategy, and going forward, like I said, you want to make sure companies you’re invested in continue to produce their earnings, even late cycle,” ETF Trends CEO Tom Lydon explained on CNBC’s ETF Edge on Monday.

O’Shares, Kevin O’Leary’s suite of funds, is another company with an ETF that experts feel offers earnings potential over the longer term.

“Quality wins in the long run,” Ric Edelman of Edelman Financial Engines said. “Another one is the O’Shares Quality Dividend Fund (OUSA), which adds a dividend feature to it, not just buying companies with strong earnings, but also those that pay dividends, on the attitude that half the profits from the stock market come from dividends, not merely growth in share price. So it makes sense in the long run, even though it might now out perform at the moment. O’Shares hasn’t done as well as the S&P. Neither has the Wisdom Tree fund. So what? At the moment isn’t a reason to invest or not invest. The long term focus behind quality. Long term makes a lot of sense,” he added.

An often overlooked benefit of using ETFs is that they can handle the intricacies of reinvestment in dividends and stock buybacks, as Lydon explains.

“Today was a great example. Citi released their earnings. They’re a big buyback monster as well… As we’re here at all-time highs, everyone is feeling pretty comfortable with the market. Rick, as you point out, going forward, if you’re feel like we might be a little bit long in the tooth with the markets, make sure you’re looking for dividend plays. Make sure you’re looking for earnings plays. Because these ETFs can actually do that work for you without just buying the general market,” Lydon said.

One trend in the news lately is stocks buying back their shares. A buyback happens when the issuing company pays shareholders the market value per share and re-absorbs that portion of its ownership that was previously distributed among public and private investors. While they may show optimism on the part of the company buybacks truly an effective strategy however?

Lydon believes buybacks by large companies like Apple shows confident in the company future and direction. Meanwhile Edelman sees the approach as misguided.

“I think notion of focusing on buybacks isn’t as effective as focusing on dividend, dividend growth, and earnings growth. Because let’s face it, it’s a hometown bias. If every CEO in the S&P 500 is deciding to buyback their own shares, they’re basically saying, ‘our stock is better than the other 499’. They’re all saying this. They all can’t be right,” Edelman said.