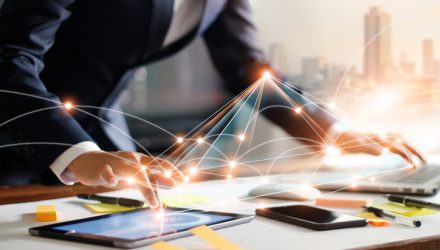 Time to Talk Tech ETFs Because The Getting is Good

Trade tensions between the U.S. and China have, at times, hampered the technology sector, but the S&P 500’s largest sector exposure has been a torrid pace this year. As measured by the popular  Technology Select Sector SPDR Fund (XLK), the group is up 33% in 2019.

XLK “seeks to provide precise exposure to companies from technology hardware, storage, and peripherals; software; communications equipment; semiconductors and semiconductor equipment; IT services; and electronic equipment, instruments, and components,” according to State Street.

“Tech has already been having a banner year, with the XLK up by about 32% for 2019 versus the S&P 500′s more than 19% gain. But with the memories of last year’s fourth-quarter collapse — which was led by Apple, the XLK’s second-biggest holding — still fresh, investors could soon start to feel the heat,” reports CNBC.

Many investors embrace technology stocks and ETFs for the sector’s growth prospects and those catalysts, including 5G, are abundant. Some market observers believe the rally in chip stocks can continue, particularly if investors remain enthusiastic about 5G.

5G technology will use a higher frequency band versus the current 4G technology standard, resulting in faster transmission of data. Being able to transmit copious amounts of data at a faster rate is certainly of benefit for wireless companies and their users, but 5G could be a major disruptor in various industries. Before this occurs, however, the infrastructure to accommodate this enhanced technology must be in place

Importantly, XLK is on the doorstep of all-time highs.

With the economic cycle entering its late stages, higher beta companies could start reigning in spending, which is something to watch for with technology names.

Adding to the near-term case for tech is that the sector often performs well late in the year and into the early parts of the new year. Plus, a slew of XLK constituents, including Apple, are slated to report earnings in the coming weeks, potentially providing upside catalysts for XLK.