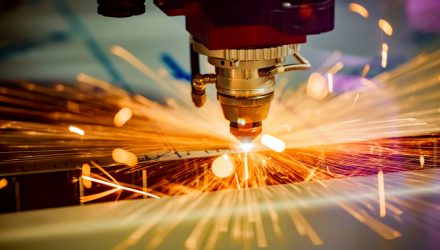 This Industrial ETF Is on the Cusp of a Big Breakout

Up 26.80% year-to-date, the Industrial Select Sector SPDR Fund (XLI) is trailing the S&P 500 by about 100 basis with much of that lethargy attributable to the controversy surrounding Boeing, among other holdings. Still, XLI’s 2019 showing is admirable and the fund looks healthy on a technical basis.

Market observers warned that the strength in the industrial segment, which is closely tied to the health of the global economy, is notable due to the lingering uncertainty over the accuracy of corporate forecasts in light of the ongoing trade negotiations between the U.S. and China.

XLI “began last week’s trading perched just above $80 — a round-number level that had marked peaks for the shares before they sliced through here in early November as a new round of U.S.-China trade headlines sparked optimism across Wall Street,” according to Schaeffer’s Investment Research. “The industrial-heavy exchange-traded fund (ETF) — which includes trade-sensitive stocks Boeing (BA) and Caterpillar (CAT) as two of its top holdings — went on to successfully test this region in the weeks leading up to the Dec. 15 deadline when the U.S. was expected to raise tariffs on additional Chinese goods, bringing in focus several other notable levels to watch on XLI.”

Looking inside the XLI

Boeing accounts for almost 7.2% of XLI’s weight and the aerospace and defense industry is the ETF’s largest industry exposure at almost 27%, underscoring the point that the group is integral to XLI’s price action. That could be a potential positive in an election year.

The Federal Reserve’s recent interest rate cut could be a boost for defense names because industrials usually benefit from lower rates. Some of the sectors likely to receive a boost after the Fed starts cutting rates include Materials, Industrials, Consumer Discretionary, and Consumer Staples.

Beyond fundamentals, XLI’s near-term technical outlook is worth monitoring.

“Also on our radar is the 200-day moving average, which, alongside the ‘under-the-radar’ 320-day trendline, emerged as support during that mid-October retreat, cushioning XLI pullbacks since March,” notes Schaeffers. “These trendlines are currently located at $76.99 and $75.16, respectively, while near here is $75.70, which is five times the fund’s all-time low of $15.14, tagged during the March 2009 market bottom, and $73.29, home to the ETF’s fourth-quarter lows and 20% year-to-date return.”