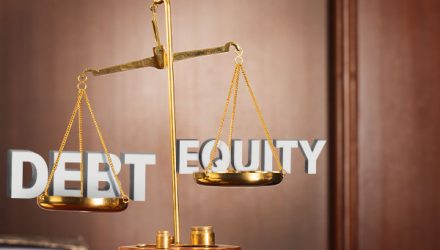 These U.S. Companies Have the Highest Debt-to-Equity Ratios Right Now

U.S. companies have never had so much debt on their books as they do now. As of the fourth quarter of 2019, non-financial firms owed some $9.6 trillion in outstanding debt, a figure that’s up more than 57 percent from the financial crisis 10 years earlier, according to data provided by the Securities Industry and Financial Markets Association (SIFMA).

Thanks to a decade-long credit binge driven by rock-bottom borrowing costs, corporate debt as a percent of U.S. GDP now hovers around 47 percent or nearly half the size of the economy. As you can see below, this level well exceeds those we saw in the last two credit cycles.

Even in good times, this would be cause for concern. Indeed, I warned about ballooning corporate debt and the economic risks it poses a year ago, back when no one had yet heard of SARS-CoV-2 or COVID-19.

And it’s not just the amount of debt that matters, but the quality. In the years since the financial crisis, BBB-rated bonds––those that sit at the very bottom of investment-grade corporate debt––have exploded 200 percent, according to S&P Global. The pool of BBB-rated bonds grew to more than $3 trillion for the first time last year and now represents 53 percent of the entire investment-grade market.

That percentage will only increase, though, as the two biggest ratings agencies, S&P and Moody’s Investors Service, are currently downgrading U.S. companies at the fastest pace since the financial crisis, with downgrades outpacing upgrades three to one.

The worry now is that, as more and more companies’ creditworthiness is downgraded to “junk” status, it will prompt a flood of selling, with not enough buyers to absorb it all.

Having said that, I was curious to see which S&P 500 companies had the most debt on their books relative to equity before markets began to tumble due to the spread of the coronavirus. As of December 31, the S&P as a whole had a debt-to-equity ratio of 1.58 percent, meaning that for every $1 they had in cash and other assets, they had $1.58 in liabilities.

So which companies had the highest debt-to-equity? Below are those that had a ratio of over 10.00, starting with a ratings agency, interestingly enough.

Moody’s Corp. had a debt-to-equity ratio of higher than 10.00 at the end of 2019, thanks in large part to a number of recent acquisitions. In July, the New York City-based company bought a majority stake in Four Twenty Seven, a “leading provider of data, intelligence and analysis related to physical climate risks,” according to the press release, and in February, Moody’s completed its acquisition of Regulatory DataCorp (RDC), a “leading provider of anti-money laundering (AML) and know-your-customer (KYC) data and due diligence services.” This complements a 2017 acquisition of company data provider Bureau van Dijk (BvD).

Lamb Weston may not be a household name, but the food it produces is eaten and enjoyed all over the world, from french fries to potato chips to hash browns. The Idaho-based company, which spun off from Conagra Brands in 2016, had long-term debt valued at $2.5 billion as of May 2019. Meanwhile, it held cash in the amount of $55.6 million.

Photo by: Mike Mozart of TheToyChannel and JeepersMedia on YouTube | CC BY-SA 2.0

Lowe’s, the second largest hardware store in the U.S. following The Home Depot, had a debt-to-equity ratio of 12.04 at the end of 2019. In May, the retail giant announced that it had completed the purchase of the Retail Analytics platform from Boomerang Commerce, which is intended to help with “strategic and data-driven pricing and merchandise assortment decisions.” On March 24, Lowe’s announced that it was issuing a total of $4 billion in new notes, taking advantage of low borrowing costs.

Like Lamb Weston, Alliance Data Systems may not be a household name, but chances are fair to good that you use their services on a regular basis. The marketing services provider, based in Plano, Texas, manages more than 160 branded credit card programs for companies ranging from Wayfair to J. Crew. It’s estimated that 40 million people have at least one of Alliance’s managed cards in their wallets. It was highly leveraged at the end of 2019, with a debt-to-equity ratio of 14.23.

An estimated 93 percent of American households own at least one vehicle, and as we all know, things break on occasion or just need to be replaced. O’Reilly Auto Parts is the largest such retailer in the U.S., with a market cap of around $34 billion in November, before stocks began to sell off. The Springfield, Missouri-based company announced in August that it was acquiring Mexican auto parts retailer Mayoreo de Autopartes y Aceites in a stock purchase agreement.

Hotels have been among the hardest hit industries due to stay-at-home and social distancing orders, and Marriott, the world’s largest hotel operator, is no exception. The company, which operates in as many as 130 countries, has had to furlough tens of thousands of workers as hotel rooms sit empty. As of June, Marriott had net debt of $10.3 billion, about half of that coming due this year. In October, the company announced it would be acquiring Barbados-based Elegant Hotels Group in a $130 million all-cash deal.

The most highly leveraged S&P 500 company in 2019––by far––was none other than Colgate-Palmolive, maker of such household brands as Irish Spring, Ajax, Cuddly, Speed Stick and, of course, Colgate toothpaste and Palmolive dish detergent. For every $1 the New York-based company has, it owes $72.50 in debt. Last year it made its first $1 billion acquisition since 1995, buying European skin care company Laboratoires Filorga Cosmetiques for $1.7 billion. This was followed in January 2020 by the announcement that it had agreed to acquire Hello Products, “one of the fastest-growing, premium oral care brands in the United States.” Also, at a time when many companies are cutting or suspending dividends, Colgate announced last month that it would be raising its dividend, from $0.43 to $0.44 a share, effective in the second quarter.

Get access to timely, insightful market commentary such as this by subscribing to our award-winning Investor Alert, available here!

Holdings may change daily. Holdings are reported as of the most recent quarter-end. The following securities mentioned in the article were held by one or more accounts managed by U.S. Global Investors as of 12/31/2019: Moody’s Corp., The Home Depot Inc.,