You are at:Home»Core Equity Channel»A Surprising Small-Cap ETF May be Worth Examining 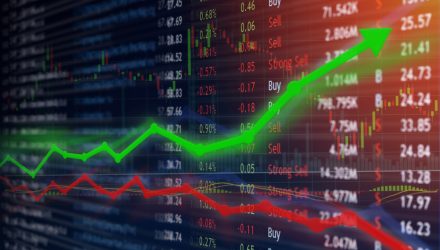 A Surprising Small-Cap ETF May be Worth Examining

With U.S. interest rates residing near zero, these are rough days for bank stocks and the small-cap members of the group are really being pinched, but that could be creating opportunity with the Invesco S&P SmallCap Financials Portfolio (NYSEArca: PSCF).

PSCF tracks the S&P SmallCap 600® Capped Financials & Real Estate Index. That index “is designed to measure the overall performance of common stocks of US financial services companies. These companies are principally engaged in the business of providing services and products, including banking, investment services, insurance and real estate finance services,” according to Invesco.

With the Federal Reserve having pared interest rates to near zero, concerns are mounting about banks’ net interest margins and whether those depressed margins could affect shareholder rewards, including buybacks and dividends. Bankers typically make their money off the difference between long-term loans and deposits, underscoring investors’ apprehension about the industry right now.

“There are some bright spots as some smaller banks “are less exposed to commercial business than they have previously been. While loans to nonfinancial businesses are near an all-time high, according to Wells Fargo data, they make up 26% to 34% of bank assets. At the same time, capital positions are better than they were in the past,” reports Carleton English for Barron’s.

“With oil prices in the mid- to low $20s, exploration-and-production companies are likely to face bankruptcies, notes Gary Tenner, managing director at D.A. Davidson. In this kind of environment, he favors banks with less exposure to oil and other troubled areas,” reports Barron’s.

Further bolstering the case for merger activity, the most appealing regional banks have exposure to healthy state economies like Texas and Florida, along with other expanding areas of the Southeast.

The banking has also traditionally been an active area for consolidation. In 2000, there were nearly 10,000 banks operating across the U.S. However, that number is now below 6,000.

None of PSCF’s holdings exceed weights of 2.27%, meaning single stock risk is benign in this fund. What isn’t low is the ETF’s trailing 12-month yield of 4.35%, which is high among bank ETFs.