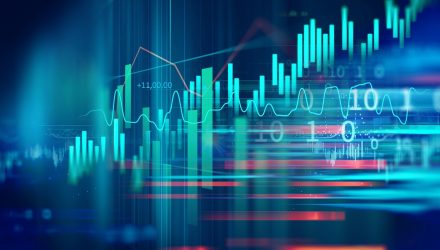 U.S. stocks popped to record highs on Thursday after the United States and China reportedly agreed to cut existing trade tariffs, generating a huge rotation into equities and an exile from bonds.

The 10-year Treasury yield had its biggest bounce since the day after President Donald Trump was elected, trading at 1.95% from 1.81% on Wednesday’s session, as prices fell. Bond yields move inversely to prices.

“The overbought conditions of 2019 are now working their way off,” said Gregory Faranello, head of U.S. rates trading at AmeriVet Securities. “Are the outcomes going to be totally constructive? Probably not, but from a market perspective these markets have been craving for something different and they’re getting it right now.”

With technology and financials leading the charge, the Dow Jones Industrial Average rallied 245 points, or 0.9% as trade while the S&P 500 rose 0.6% as the financials sector gained 1.3%. Energy stocks also advanced 1.3% while tech and communications services advanced 1% each.  The Nasdaq Composite, meanwhile, climbed 0.7%.

A U.S. official also said both sides agreed to rollback some tariffs, according to Reuters.

“This gets us closer to a phase one trade deal, which is more important psychologically than fundamentally,” said Art Hogan, chief market strategist at National Securities. “It’s not as though we’re removing all tariffs and the economic drags dissipate, but what does dissipate significantly is the uncertainty.”

The news comes as a surprise as just yesterday headlines suggested that there might be no evolution to the trade negotiations until December, with both sides unable to secure a suitable meeting site.

“The last 24 hours have seen a bit of whiplash in the U.S./China trade drama, as a potentially negative headline yesterday has been more than offset by a positive one this morning,” said Tom Essaye, founder of The Sevens Report, in a note to clients. But “it’s fair to say that at these levels, the market is already partially pricing in removal of the tariffs that were implemented on September 1.”

“That also means the risk is of disappointment is now real on an actual phase-one announcement, because if all we get is ‘what’s expected’ and we don’t see any existing tariff removal, we could easily see a sell-the-news reaction in stocks,” Essaye said.

Investors who are willing to take on some risk as they bet on higher stocks and lower bond prices could look into the ProShares Short 20+ Year Treasury (TBF) or the iPath US Treasury 10-year Bear Exchange Traded Note (DTYS).