You are at:Home»Core Equity Channel»Small-Cap ETFs Could be Volatile in October 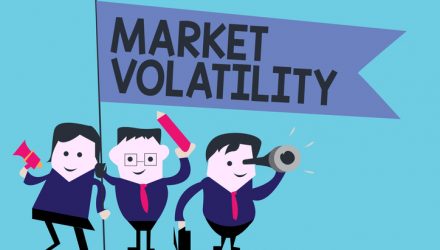 Small-Cap ETFs Could be Volatile in October

The iShares Russell 2000 ETF (NYSEArca: IWM), which tracks the widely observed Russell 2000 Index of small-cap names, and other small-cap ETFs are coming off solid performances in September, but some market observers believe smaller stocks could encounter some October turbulence.

“The Russell 2000’s history shows that investors shouldn’t expect much from the index in October,” reports Nicholas Jasinski for Barron’s. “The 10th month of the year tends to see the small-cap index lose more than a percentage point on average, and end about half of the time, according to Dow Jones Market Data, using performance since 1987.”

Investors looking to remain engaged with small caps in less volatile fashion should consider the ProShares Russell 2000 Dividend Growers ETF (CBOE: SMDV), which has a history of being less volatile than standard small-cap funds.

“Last year saw the Russell 2000 drop almost 11% in October, before recovering slightly in November. Other major market crashes have come in October as well. Stocks—and higher-beta small caps in particular—tumbled in October of 1929, 1987, and 2008,” according to Barron’s.

Due to its dividend growth focus, SMDV is usually less volatile when volatility spikes and its downside capture is significantly lower than that of standard small-cap benchmarks.

Investors may want to consider SMDV now because small-cap stocks often flourish in the latter stages of the fourth quarter.

“After October passes, history says that small-caps tend to be in the clear. November and December have been among the strongest months of the year for small caps. The Russell 2000 was up in four out of five Decembers since 1987, with an average return of 2.6%. November has been in the green 66% of the time, with a 1.5% gain on average,” according to Barron’s.