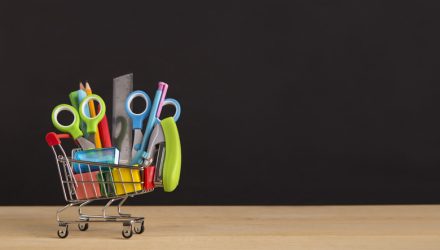 Dow component Procter & Gamble (NYSE: PG), often the largest holding in a slew of cap-weighted consumer staples ETFs, such as the  Consumer Staples Select SPDR (NYSEArca: XLP), reported earnings last week and the reaction to that report was disappointing with market observers opining that P&G is expensive.

Consumer staples are those items that appear in our cupboards and closets, from shaving cream to soda. These items cover many everyday items and consumer goods that will continue to see demand regardless of the economic situation.

In P&G’s report last Thursday, “the company cited foreign affairs, including unrest in Hong Kong and Brexit, as one of the causes for missing its second-quarter sales estimates. RBC analyst Nik Modi says these events will affect other companies, including Coca-Cola (KO), PepsiCo (PEP), Mondelez (MDLZ), and Colgate-Palmolive (CL),” reports Bonnie Bennett Slater for Barron’s.

The downside of upside in defensive sectors, including consumer staples, is that lofty valuations often ensue and some analysts view that as the current condition facing staples stocks, but that doesn’t XLP is at a loss for the opportunity.

Interestingly, the staples sector isn’t being as disrupted as corners of the retail space by e-commerce. Additionally, some big-name staples retailers, Walmart and Costco being prime examples, are establishing dominant online footprints. Costco and Walmart are both top 10 holdings in XLP and FSTA.

“As digital transformation continues to disrupt retail shopping patterns, one place where US consumers seem reluctant to change their purchasing habits is at the grocery store,” said Nicola Stafford, Fidelity sector portfolio manager, in a recent note. “In 2017, less than 1% of US food & beverage sales took place online, demonstrating exceptionally low e-commerce penetration both on an absolute basis and relative to many other major developed and emerging markets.”

Plus, there’s evolution coming in the normally stodgy sector.

“Still, online grocery shopping continues to grow in popularity, and some analysts predict that the percentage of food & beverage sales that take place online could triple over the next decade,” said Stafford. “Evolution in this space should drive winners and losers, in my view, which is why I’m focused on companies I think are best-positioned to benefit as grocers pursue the technologies of convenience that can impel more of their shoppers to buy digitally.”