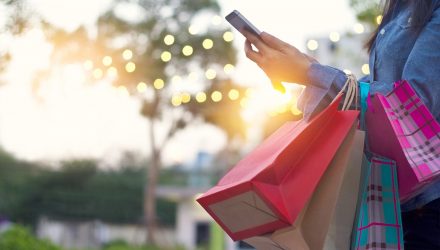 Ian Young August 19, 2019
While stocks are continuing their rally back from last Thursday, the SPDR S&P Retail ETF (XRT) is up over 1% today, although still down 8% for the month.
XRT seeks to provide exposure the retail segment of the S&P TMI, which comprises the following sub-industries: Apparel Retail, Automotive Retail, Computer & Electronic Retail, Department Stores, Drug Retail, Food Retailers, General Merchandise Stores, Hypermarkets & Super Centers, Internet & Direct Marketing Retail, and Specialty Stores.
“I think what we’ve learned is that the consumer is definitely hanging in there. As we’ve talked for the past couple of years there are the have not’s. There are the retailers that are driving traffic, that’s target Walmart, TJ Maxx, Ulta, which you were just talking about, cosmetics with Estée Lauder and the selfie generation, And of course there are the department stores and the specialty retailers that really have a lot of self inflicted pain here. But the consumers remain strong. Clearly there are increased signs of potential issues ahead. But for now the numbers look good,” said “Stacey Widlitz, S.W. Retail Advisors president on CNBC.
Foreign consumers, especially those from China have had a dramatic impact on American retail business, as Widlitz describes.
“That is a huge part of the business, and it’s a very important part of the business. You know Tiffany last quarter said that the Chinese visitors drop 25%. That’s an incredible number for them. Are used to say at the flagship store New York tourism was up to 40% of their business. So it’s so important. And as you see the Chinese: A. Have less spending power because of their currency, B. They’re staying home and repatriating luxury spending, and of course third the American brands question if they’ll be some retaliation. Some of these North American brands are under significant pressure here, you know Tiffany is one example and certainly you have TPR and CPRI Capri and Tapestry that are also suffering from the clients in the whole sale space,” she explained.
Macy’s was in the news recently for dismal second quarter earnings. However, when asked whether Macy’s was a good bet because of the sizable dividend that it is currently offering, at roughly 9%, Widlitz explained, “that yield suggests, of course there is more risk to come… so I would continue to avoid them. It’s like catching a falling knife,” she said.
Bullish investors looking for other retail ETFs to explore can consider the VanEck Vectors Retail (RTH). Investors who believe the tariffs will continue to weigh on the retail segment can consider bearish or short ETF strategies to hedge against the weakness, such as something like the ProShares Decline of the Retail Store ETF (EMTY).
For more investing ideas, visit our Tactical Allocation Channel.