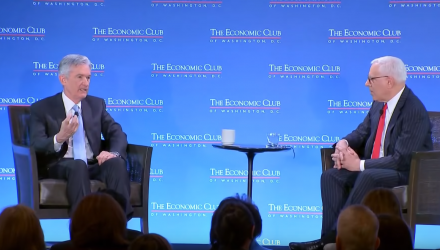 Just as the markets are recovering from a volatile year’s end to 2018, the last thing investors want to hear is the word “recession.” However, the word has been thrown around the central bank more often, according to the latest CNBC Fed Survey.

According to the survey, which was conducted while the U.S. was in the midst of a government shutdown, the chance of a recession happening within the next 12 months rose to 26 percent. The last highest level was in 2016 when it reached 29 percent.

The level reached its highest in 2011 when it hit 36 percent.

“When you look at the slide in global growth, it is hard to think that, in a matter of time, the U.S. won’t join the slide,” Kevin Giddis, Head of Fixed Income Capital Markets at Raymond James Financial, wrote in response to the survey. “This prospect has only been enhanced by a lack of a trade deal, the government shutdown, and a completely inefficient cooperation in Washington.”

The Fed is in the middle of a two-day policy meeting, which began on Tuesday and will conclude with Federal Reserve Chairman Jerome Powell speaking at a press conference–something the markets will obviously pay attention to closely.

“The FOMC policy statement will shift to a dovish tone that aligns with recent Fed speak,” Kathy Bostjancic, head of U.S. Macro Investor Services at Oxford Economics USA, wrote about the January meeting. “It will signal a pause in rate hikes by removing the reference to ‘some further gradual’ rate increases and modifying or removing the balance of risks assessment.”