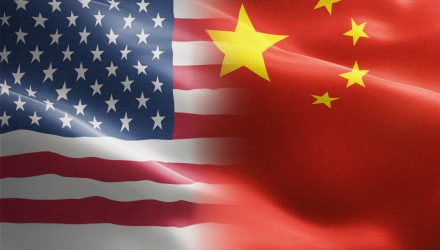 U.S. markets and stock ETFs rose Tuesday as comments on trade and positive updates from a number of companies helped fueled optimism.

“When you take a look at all the (trade) comments that have come out, the markets have reacted a little bit to it, but it certainly creates a positive bias,” Paul Nolte, portfolio manager at Kingsview Asset Management, told Reuters. “The second part is that Thanksgiving week tends to be positive for stocks as well.”

Chinese officials revealed they reached a consensus with U.S. negotiators on resolving certain problems, hinting the two sides are moving to a “phase one” deal. However, analysts advised investors to remain cautious as trade headline updates have triggered market volatility and the oscillations are likely to remain until the U.S. and China actually sign a deal, the Wall Street Journal reports.

Trump on Reaching a Deal with China

President Donald Trump stated the United States was in the “final throes” in a push to reach a deal with China, but he added Washington stood with protesters in Hong Kong, which remains a point of contention with Beijing.

“While top officials on both sides have sounded positive, potential barriers to a broad agreement remain,” strategists at UBS Global Wealth Management said in a note, pointing out that the U.S. and China have yet to decide on a deadline for signing a deal and whether tariffs scheduled to take effect next month will be delayed.

Further adding to the risk-on setting, Best Buy shares surged after it increased sales and profit targets for the fiscal year and revealed plans to compete with Amazon.com this holiday season.

Walt Disney Co also gained on reports that the streaming service was averaging almost a million new subscribers per day.