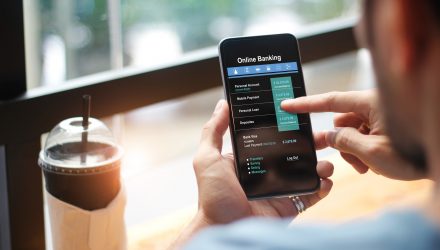 How to Dodge Sagging Bank Stocks

The financial services sector is again struggling, igniting talk that some bank stocks and the relevant ETFs are either in corrections, close to corrections or flirting with bear markets.

Last week, the sector stumbled after the Federal Reserve downgraded its outlook for the U.S. and reaffirmed its earlier dovish stance, which provides a poor environment for U.S. banks, whose business models typically capitalize on rising interest rates.

Excluding financial services stocks is proving meaningful in terms of 2019 returns. SPXN is up 13.19%, beating the traditional S&P 500 by more than 150 basis points this year. SPXN resides just 3% below its 52-week high.

What’s Next for U.S. economy

Most investors turn to beta index-based ETFs, like the SPDR S&P 500 ETF (NYSEArca: SPY), to fill out their core stock portfolio position. However, the broad approach may expose investors to underperforming segments of the market. For instance, among its top sector allocations, the S&P 500 Index. SPY currently allocates 12.66% of its weight to the financial services sector.

“Bank stocks are now in a bear market, having fallen more than 20 percent from a June peak, while the financials tumbled into a correction with losses of 13 percent from their 52-week highs,” according to CNBC.

SPXN is proving its mettle at a time when a major sector component in the S&P 500 is struggling.

The ETF “offers investors a way to reduce or even eliminate exposure to a sector they believe may underperform,” according to ProShares. “SPXN can serve as a risk management tool for investors who have a large exposure to financials or real estate.”