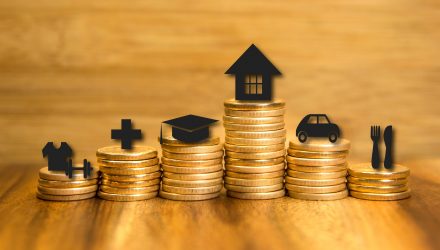 2019 was a record year for the stock market and the risk-on sentiment may have also fueled optimism for consumers in the fourth quarter as Americans took on more loans. Household debt climbed to $601 billion, according to data from the Federal Reserve Bank of New York.

The majority of the debt was comprised of loans for home purchases and refinances. Given that Treasury yields are at lows, this makes sense as consumers are able to obtain debt at low rates in the current environment.

According to a Bloomberg report, “total U.S. household debt rose by $601 billion in the fourth quarter from a year earlier, or 4.4%, surpassing $14 trillion for the first time, the New York Fed’s quarterly household credit and debt report showed. That’s $1.5 trillion above the previous peak in the third quarter of 2008. Overall household debt is now 26.8% above the second-quarter 2013 trough.”

Looking specifically at the mortgage debt numbers per the Bloomberg report, “mortgage borrowing rose by $120 billion to $9.56 trillion. The rate for a 30-year mortgage has fallen by about 100 basis points over the past year, adding to home purchasers’ buying power. For example, a $500,000, 30-year loan costs about $300 less per month.”

“Mortgage originations, including refinances, increased significantly in the final quarter of 2019,” Wilbert Van Der Klaauw, vice president at the New York Fed, said in a statement.

Other notables in the NY Fed report as reported by Bloomberg:

The debt data comes as job openings in December fell to their lowest level in two years, according to data from the Labor Department. Data revealed that total vacancies stood at 6.4 million by 2019, which is down from 6.8 million during the month of November after Wall Street estimates came in at about 6.9 million.

Per a CNBC report, the “Job Openings and Labor Market Survey is closely watched by Federal Reserve policymakers as an indicator for where employment trends are heading. The total vacancies outnumber job seekers by nearly 700,000, down nearly by half from a few months ago. There are now fewer nongovernment job openings than there are unemployed.”

“Net, net, job openings around the country are plummeting in a way that we hate to say looks like a recession,” said Chris Rupkey, chief financial economist at MUFG Union Bank.