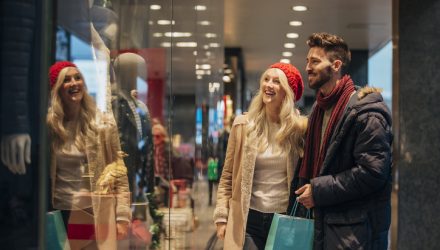 Some recent weakness in consumer confidence and retail sales data has some market observers concerned about the strength of the retail sector in the fast-approaching holiday shopping season. By most accounts, however, if there is a weakness, it will be confined to ailing brick-and-mortar retailers, providing a potentially compelling opportunity with the ProShares Decline of the Retail Store ETF (NYSEArca: EMTY).

It could be an early sign that consumers might be less inclined to open their wallets this holiday season. According to the Commerce Department, U.S. retail sales fell for the first time in seven months during the month of September, which could put retail exchange-traded funds (ETFs) on watch.

Retail sales fell 0.3% last month as consumers scaled back their spending on items, such as automobiles, building materials, and online purchases. Economists polled by Reuters were expecting an increase of 0.3% in September.

“Low unemployment and rising wages have meant a healthy consumer backdrop, but e-commerce and shifting consumer behavior means that brick-and-mortar stores haven’t necessarily been the beneficiaries of that tailwind,” reports Nicholas Jasinski for Barron’s. “The story has been further complicated by tariffs and a potentially peaking economy.”

Underscoring the strength in e-commerce, weakness in brick-and-mortar retail and EMTY’s ability to profit from those dynamics, the fund is up nearly 13% over the past year compared to a 10.44% loss for the  SPDR S&P Retail ETF (XRT).

“It’s anyone’s guess when the cost impact of tariffs as a result of the U.S.-China trade war will go away, and the roster of datapoints signaling a slowing U.S. economy continues to grow,” according to Barron’s. “Should consumers meaningfully pull back on spending in 2020, already-challenged discretionary retailers will bare the brunt of the pain. And it goes without saying, e-commerce isn’t going anywhere.”