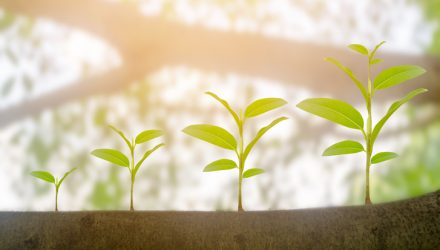 Growth ETFs May Have Some Say In Value Debate

Recently, the iShares Russell 1000 Value ETF (IWD) and other value ETFs have been showing signs of life, prompting some investors to ponder the near-term fate of growth funds, including the iShares Russell 2000 Growth ETF (IWF). However, some market observers believe the case for growth isn’t dead.

Growth stocks are often associated with high-quality, prosperous companies whose earnings are expected to continue increasing at an above-average rate relative to the market. Growth stocks generally have high price-to-earnings (P/E) ratios and high price-to-book ratios.

Importantly, value/growth spreads are not so alarming so as to punish the case for growth fare.

“While today’s premium of growth over value is elevated, it is not indicative of an extreme event like the tech bubble,” according to BlackRock. “As of the end of August, the Russell 1000 Growth Index was trading at a 70% premium to value. While the current premium is high by post-crisis standards, it is not even in the same zip code as 20 years ago. At its peak in 2000, the P/E on the Russell 1000 Growth Index was 350% of the value P/E.”

Investors can still enhance their portfolios as the bull market extends with growth-oriented stocks that continue to perform despite the recent bouts of volatility. The growth style has outperformed the market in spite of being prone to sell-offs with strong corporate earnings. Plus, slowing economic growth can actually lend support to the case for growth stocks and ETFs.

“Today’s premium is about what you’d expect given the economic landscape,” said BlackRock. “As I highlighted a few months ago, growth’s premium expands as economic expectations diminish. This relationship is well captured by the U.S. Treasury curve, which explains roughly 50% of the ratio in multiples. With the 10-2 Treasury Curve near inversion, i.e. 2-year yields equal to 10-year yields, today’s premium looks about right.”

Related: Can The Fed Keep The Market Rallying?

Growth stocks may be seen as exorbitant and overvalued, causing some investors to favor value stocks, which are considered undervalued by the market. Value stocks tend to trade at a lower price relative to their fundamentals (including dividends, earnings, and sales). While they generally have solid fundamentals, value stocks may have lost popularity in the market and are considered bargain priced compared with their competitors.

“Te bottom line is not that value will never outperform again. A sharp cyclical upturn, as we experienced in late 2016, could lead to a strong period for value. That said, the tailwinds continue to favor growth, which is why investors should expect to pay a premium for it,” according to BlackRock.