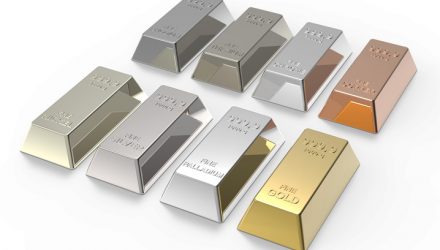 Gold’s Getting All The Love, But This Precious Metal is Surging, Too

With a slew of gold-backed exchange traded funds recently hitting 52-week highs, it is easy for commodities investors to narrowly focus on the yellow metal. Palladium and the Aberdeen Standard Physical Palladium Shares ETF (NYSEArca: PALL) confirm investors should pay some attention to other precious metals.

All PALL has done this month is surge 14.47%, topping the largest gold-backed ETF by nearly 400 basis points.

Some market observers believe palladium demand will be steady over the next several years, potentially underpinning higher prices for PALL. Palladium is a key component used by the car industry in catalytic converters fitted in petrol-powered vehicles to diminish harmful greenhouse gas emissions.

“More than three-quarters of palladium ends up in catalytic converters for gasoline engines and the rise in the precious metal comes despite a severe slowdown in vehicle sales around the world,” reports Frik Els for Mining.com.

“What has lifted palladium is greater average loadings per vehicle as more stringent emissions standards are implemented in China and Europe coupled with the perennial threat of strikes in South Africa which together with Russia are responsible for more than 80% of global output,” according to Mining.com.

Precious metals like gold and palladium can provide investors with the uncorrelated diversification of their investment capital via the convenience, transparency and liquidity of an exchange-traded fund (ETF).