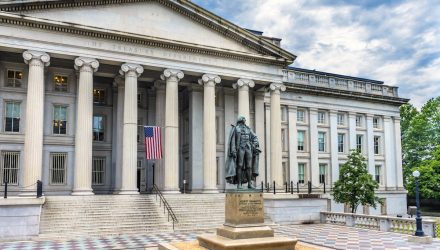 Getting Cautious on Treasuries When Adding Exposure to U.S. Debt

In the current market environment, many anticipate the Federal Reserve to step back from its tightening monetary policy. The policymakers’ median rate expectations for 2019 dipped to two interest rate hikes from three in response to the latest “dot plot” projections due to a softer growth and inflation outlook.

“U.S. Treasury yields dropped sharply in March, breaking out of the tight range they had traded in early this year,” said BlackRock in a recent note. “Could yields head lower still, extending the rally in Treasury prices? We take a cautious short-term stance, and see recent moves as excessive. Yet we still like U.S. Treasuries for their key role as portfolio diversifiers.”

Five-year yields have risen a bit this month, but still remain well below the early March highs as expectations that the Federal Reserve will hold off on raising interest rates this year push bond prices higher.

“A major factor fueling the rally in Treasury prices: Market reaction to the Federal Reserve’s dovish pivot this year, with the central bank indicating its rate hike pause could be an extended one,” said BlackRock. “Yet we believe market expectations of Fed policy have become too dovish. Markets have swung from pricing in two quarter-percentage-point Fed rate increases between fall 2018 through the end of 2020 to now pricing in two decreases by the end of 2020.”

“We prefer shorter-dated bonds and allocations to inflation-protected securities, amid the likelihood of a steeper yield curve and higher market-based inflation expectations,” according to BlackRock.