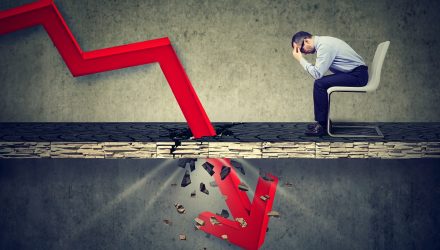 Futures Are Limit-Locked In Overnight Session As Markets Plummet

In a rare historical event, futures markets were locked limit down in overnight trading on Sunday, as investors panicked over the coronavirus and oil crashed.

On Saturday, Saudi Arabia cut official crude selling prices for April, radically reversing its stance from previous attempts to support the oil market as the coronavirus destroys global demand. The decision for the cut arose after OPEC talks deteriorated on Friday, encouraging confident strategists to predict oil prices tanking to $20 per barrel this year. Unfortunately, they were not far off, as crude hit just over $27 a barrel in overnight trading, and is currently trading near $33.50, down 19%.

Feeling the pain of crude, investors crushed stocks Monday as they continued to panic over the furious spread of the coronavirus and its global economic implications.

The Dow Jones Industrial Average tanked 1,567 points, a loss of 6.1%, and is on pace for its one day decline since December 2008. Fellow market S&P 500 plunged 5.7%. The massive sell-off triggered a key market circuit breaker minutes after the opening bell. Trading was halted for 15 minutes until reopening at 9:49 a.m. ET. At one point in morning trading, the 30-stock Dow plummeted 2,046 points, and the S&P 500 plunged 7.4%.

The massive declines came after a week of incredible volatility that saw the S&P 500 ranging up and down over  2.5% for four days in a row. While Monday’s drop was massive, it still didn’t breach the 20 worst days for the S&P 500, which range from -7.5% to over -20%.
The markets did enter the dreaded bear market correction territory, down 20% from all-time highs, as the yield on the benchmark 10-year Treasury note plummeted below 0.5% for the first time, while the 30-year rate penetrated 1%. At one point early Monday, the 10-year dropped to 0.318%.
As of Monday, global cases of the coronavirus contagion infection have breached 111,000, with at least 3,800 deaths around the world. The situation is also deteriorating further in the U.S. with New York, California, and Oregon, all declaring states of emergency.
Just last week, analysts expressed concern that markets have further to go on the downside.
“The magnitude of the sell-off in the S&P 500 so far has further to go,” Binky Chadha, Deutsche Bank’s chief equity strategist, said in a note recently. “In terms of duration, just two weeks in, it is much too early to declare this episode as being done.”
As I’ve been mentioning for some time, savvy investors looking to play the downside of the market can use inverse ETFs like the ProShares Short QQQ (PSQ) or the Direxion Daily S&P 500 High Beta Bear 3X Shares (NYSEArca: HIBS). HIBS is up 31% today alone.
For more market trends, visit ETF Trends.