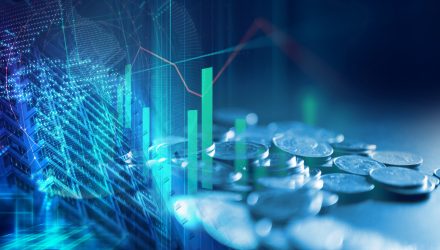 The Financial Select Sector SPDR (NYSEArca: XLF) and other financial services ETFs are rebounding this year following sour performances in 2018. XLF, the largest ETF tracking the sector, is higher by more than 10%, but some important technical tests loom of this benchmark sector fund.

When the sector struggled against the backdrop of short-term rates rising faster than long-term rates, investors grew anxious and rapidly departed funds like XLF. While financials have shown some momentum this year, the group is still lagging other sectors and broader equity benchmarks.

“Even the most cursory comparison between XLF and a sampling of other closely watched broad-market and sector benchmarks confirms that XLF is one of a very few underperforming vehicles that has yet to notch a single daily close above its 200-day moving average since heavy selling first began to grip the stock market in early October,” according to Schaeffer’s Investment Research.

What’s Next for XLF ETF

The sector’s valuations are significantly depressed following last year’s slide. While valuations for financials are low, earnings growth remains solid. Financials continue to have the look of a value sector, but on a technical basis, there are issues to contend with.

XLF’s 320-day “trendline was solid support in June-July 2018, but quickly switched roles to act as firm resistance following a breach by XLF in early October (the shares peaked at their 320-day in early November and again in early December). So even if XLF were to hurdle past its 200-day, this longer-term trendline would be looming just beyond,” notes Schaeffer’s.

Some market observers warned that banks may even be cutting back on lending as bankers are becoming more concerned over the late-cycle U.S. economy. Indicators such as credit-card charge-off rates have increased.

A flatter yield curve would typically diminish bank profits as they try to profit on the spread – short-term rates affect a bank’s borrowing costs and long-term rates limit how much they can charge on loans.

“Even more troubling for XLF is the fact that its March 1 year-to-date high close — the one that directly preceded last week’s 200-day retreat — occurred at $26.69, almost exactly level with the $26.64 level that marks a 10% correction from its March 2018 closing high, which assumes some fresh year-over-year relevance this month,” according to Schaeffer’s.