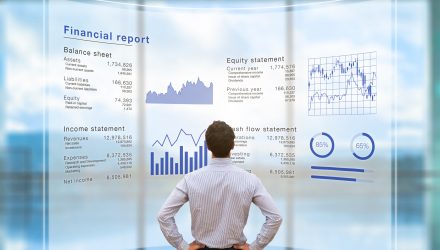 With earnings season underway, and in the wake of an FOMC announcement, the S&P 500 had another volatile session, scoring another new high, and an all-time high overnight, before dropping painfully into the close.

While Apple had a strong earnings number on Tuesday, driving the tech stock higher in the minutes following the post-market release, and spurring general investor enthusiasm in the following day’s session, all may not be rosy on the global economic front with today’s selloff into the close.

Before the Apple earnings release this Tuesday, last week on CNBC, Simeon Hyman, head of investment strategy at ProShares gave his take on earnings and the global economy.

“So far they [earnings]are not great. We’ve got about a fifth of the S&P 500 reporting, 2 or 3 percent topline growth, which is not bad at all, but basically flat on the earnings front,” Hyman said. “And that is the concern over that we were perhaps at peak margins, especially as we are trying to anniversary those big corporate tax cuts.”

Hyman is not alone in this sentiment. Across the globe there are warning signs beginning to emerge, making the state of the economy a concern. The IMF recently downgraded its forecast for global economic growth for the fourth time in nine months. We are now in a “significantly weakened global expansion,” according to IMF chief economist Gita Gopinath.

Still, with new highs being made in the S&P 500 on an intraday basis, perhaps the market still has some gas in the tank to fuel this bull market a bit further.

Ed Keon, chief investment strategist and portfolio manager at QMA, gave his view on CNBC as well, “We had a great run already this year, but that basically puts us back to pretty close to the highs. But I think if we’re gonna drive the market higher from here, we’re gonna need to see decent earnings news, but also a good GDP report Friday would be helpful, and also stronger economic data, which we are starting to see from China and elsewhere, in the sense that maybe the global economy has bottomed and we are starting to see a little acceleration.”