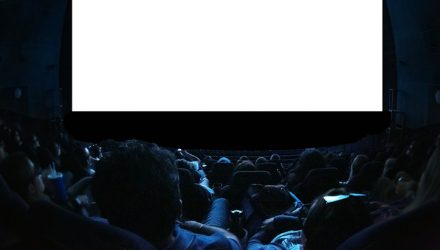 Disney Could Mount Its Biggest Rally in 2020

I got to spend lots of time with my one-year-old daughter over the holidays, who is quickly becoming a Disney (DIS) superfan. She dragged me and my wife into the playroom to watch the movie Frozen at least five times.

If you have a daughter or granddaughter, I’m sure you know all about Frozen. The mega-hit raked in $1.2 billion when it hit the big screen in 2013. So it was practically a guarantee Disney would make a sequel. Frozen II hit theaters a few weeks ago and raked in another $1.2 billion.

Billion-Dollar Movies Used to Be Rare

Of the tens of thousands of movies ever made, only 40 have crossed the billion-dollar mark. But Disney seems to have cracked the secret formula for producing tremendous hits. It churned out a record-breaking six billion-dollar movies in 2019: Avengers: Endgame, Captain Marvel, The Lion King, Toy Story 4, Aladdin, and Frozen II.

As my regular readers know, I’m a long-time fan of Disney’s stock. (You can read my investment case here.) No company in the world crafts great stories that capture kids’ (and adults’!) imaginations like Disney.

Disney has created the top-selling movie five years in a row. And in 2019 it took over the top six box office slots! In fact, its movie studio raked in a record $12.7 billion last year, helping push Disney stock up 33%: 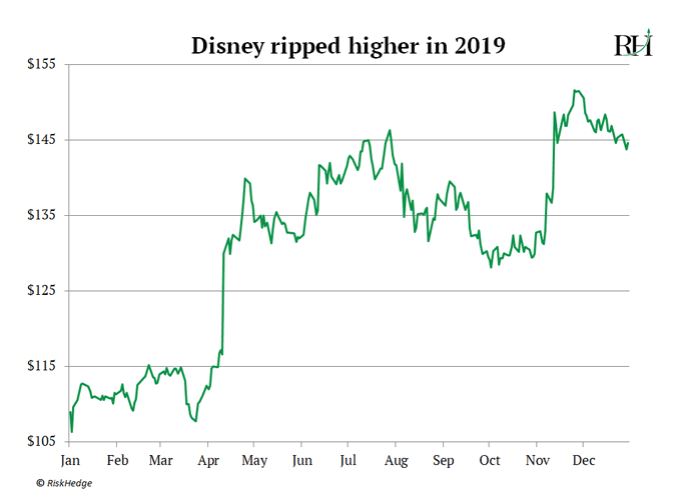 I’ve been pounding the table on Disney stock since it was selling for around 100 bucks. It’s jumped above $140/share—and I’m loading up on the stock right now.

Disney’s total domination at the box office has folks wondering, “How can it top this in 2020?” Disney probably won’t churn out another six billion-dollar hits this year. The previous record was three—also held by Disney. So its 2019 record-breaker will probably stand for a few years.

But here’s the thing, for all the attention Disney’s movie studio gets, it makes up less than one-fifth of its business. In fact, last quarter, movies were Disney’s smallest business! The real secret to Disney’s success is its ability to make money from its content a dozen different ways.

Have You Ever Caught the “Movie Travel Bug?”

You watch a movie set in Italy and you get the itch to travel to Italy. Movies give me the travel bug all the time. I watched the Netflix series Narcos about Colombia’s drug cartels. The incredible scenery made me want hop on a plane and see it for myself.

Fanaticizing about places we see on TV doesn’t only happen to grown-ups. Kids watch and re-watch Disney hits like Toy Story or The Lion King. Before long, they’re begging their parents to visit their favorite characters at Disney World.

I recently was talking with a taxi driver named Declan. His daughter is a huge Disney fan, and she asked him to take her to Disneyland Paris to see the Frozen Celebration. Declan told me, “Nobody does Christmas like Disney.”

For Disney, movies are just a stepping stone to get you to open your wallet again. Imagine how many kids saw Toy Story 4 or The Lion King and begged their parents to take them to Disneyland?

In fact, over the holidays, Disney temporarily stopped selling daily tickets for its parks because they were full to the brim!

Disney’s big year at the box office should drive record attendance at its theme parks in 2020. And theme parks are Disney’s most important business, accounting for 40% of sales.

Plus, Disney Has a New Ace Up Its Sleeve

If you been following my essays, you knew about the big launch of the Disney+ streaming service a good six months before most anyone else was talking about it.

Now everyone’s talking about Disney+ and its “motherlode of content.” Disney+ has 7,500 television shows and 500 movies, including practically every film your kids might want to watch.

10 million subscribers signed up to Disney+ on the first day! And recent analysis from investment firm Cowen & Co. pegs the subscriber count at 24 million. That’s already one-sixth as big as Netflix, and Disney+ has been live for all of two months.

Disney+ is going to overtake Netflix a lot sooner than most folks anticipate. Disney is using a genius strategy of releasing its blockbusters like Toy Story 4, Frozen II, Aladdin, one by one on its streaming app. It plans to use each launch to incentivize folks to whip out their credit cards and sign up.

Disney could announce Toy Story 4 will drop on Disney+ Memorial Day weekend, and I bet it gets hundreds of thousands of new subscribers. My research suggests Disney will make even more money from streaming than from movies.

Movie theaters usually take a 40% cut of all box office ticket sales. In other words, for every billion-dollar hit, Disney keeps roughly “only” $600 million.

But in streaming, Disney keeps the whole $1 billion. And although its streaming business isn’t even a year old, streaming sales topped sales in its movie business last quarter. NOBODY is talking about this!

Disney is a stock you want in your portfolio in 2020 and for the long haul.