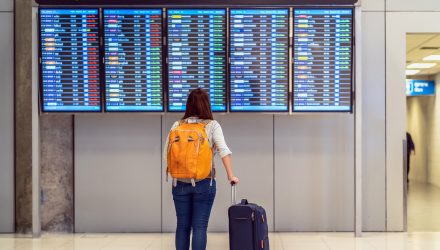 Could The Coronavirus Be Infecting Travel ETFs?

As the coronavirus death toll climbs ever higher, having crested more than 550 recently, with over 28,000 confirmed cases of the virus, air carriers have cut service after demand fell sharply and governments took more drastic measures that they say hopes to curb the spread of the disease.

Dai Xin planned to fly to the northeastern Chinese city of Shenyang this month to celebrate her 40th birthday. But the rapid contagion rate of the coronavirus changed her mind.

“I’m nervous to come back,” the New York-based surgical technician said as she was canceling her Air China flight at a travel agency in the Flushing section of Queens on Saturday because she was worried about the difficulty of returning to the U.S. “It’s not worth it” to visit her native China now, she said.

With the city of Wuhan, where the virus was first identified, under lockdown, hundreds of Americans have already left Wuhan for home in three government-organized evacuation flights over the last 10 days. Washington last week raised its travel alert for China to the highest level of “Do Not Travel,” and advised Americans in China to depart via commercial airlines.

United Airlines this week followed American in curbing Hong Kong flights as well as to its mainland China routes. Delta Air Lines also accelerated its scheduled cuts to this past weekend.

Now it seems airline-focused ETFs could be taking hit as a result of the route cuts.

The SPDR S&P Transportation ETF (XTN), which was performing well throughout the month has begun backing off today, even with stocks moving higher. The ETF is off by 0.38% Thursday. The iShares Dow Jones Transport. Avg. ETF (IYT) is experiencing a similar pullback, down 0.42% today. Meanwhile, the U.S. Global Jets ETF (JETS) has taken the biggest hit today, down 1.17%.

Despite the continuing virus contagion woes however, Mike Ryan, the executive director of the WHO’s Health Emergencies Program, said at a news conference Thursday in Geneva that it was positive that the number of cases in Chinese provinces outside of Hubei hadn’t accelerated, and that the number of fresh infections over the prior 24 hours in China had fallen from the previous day.