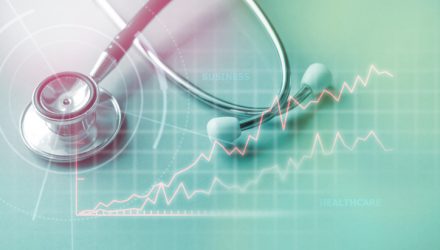 Big Pharma Could Lift The SPDR Healthcare ETF in 2020

The SPDR Health Care ETF (XLV), one of the dominant names among healthcare ETFs, has been making its way higher in the fourth quarter after scuffling for much of 2019 and some market observers believe the good times can continue in 2020 as blue-chip pharmaceuticals stocks lead the way.

Healthcare stocks, at least for now, have appeared to shake out of the politically-induced doldrums seen earlier this year and XLV’s compelling growth/value mix could prove attractive over the near-term. However, some market observers believe the sector isn’t risk-free with a presidential election year looming in 2020.

“For Major Pharma, we remain constructive on the group and see the potential for a recovery year in 2020 after the sector underperformed the broader market in 2019,” said J.P. Morgan in a note out Thursday.

Industry consolidation remains a potential catalyst for pharmaceuticals stocks in 2020.

“We see biz dev pivoting towards bolt-on deals in 2020 with focus on building out existing therapeutic verticals and adding potential mid-2020s launch opportunities,” according to J.P. Morgan.

Additionally, a Recycle Intelligence report noted that healthcare “saw a 14.4 percent increase in mergers and acquisition activity from 2017 to 2018, data from PricewaterhouseCoopers revealed. In total, there were 1,182 M&A deals in 2018, and M&A activity has remained firm in 2019, with deal volume exceeding 250 deals in the first three quarters.”

Although next year is a presidential election year, J.P. Morgan sees the political headline risk that hampered XLV and other healthcare ETFs earlier this year easing.

“While pricing reform controversies are likely to persist in 2020, there appears to be more headline risk than fundamental risk,” according to the bank. “We continue to expect more bark than bite in 2020 as we have seen very little legislative progress in 2019 that suggests significant price reform is likely with a split Congress and a limited ability for the administration to implement significant reform.”