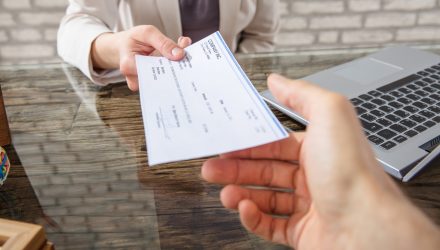 Exchange traded funds focusing on bank stocks, including the bellwether SPDR S&P Bank ETF (NYSEArca: KBE), have endured eventful several weeks. KBE and rival bank ETFs tumbled in mind-March, but over the past week, the KBE is higher by more than 6% as the previously inverted yield curve returned to normal form.

“Banks came under pressure on March 19 as yields on 10-year Treasury notes rose above those on 3-month notes, a so-called bond-yield inversion, which can presage an economic recession. Inverted yields also make life very difficult for banks,” reports Al Root for Barron’s.

Some market observers warned that banks may even be cutting back on lending as bankers are becoming more concerned over the late-cycle U.S. economy. Indicators such as credit-card charge-off rates have increased, though the rate leveled off over the summer. Still, it cannot be ignored that bank stocks are rebounding over the past several trading sessions.

With the yield reverting to normal, KBE and competing bank funds could benefit.

“Now the yield curve is sloping upward again—more or less normal—with yields on longer-dated debt above those on shorter-term securities,” according to Barron’s. “That’s good news for banks on its own, but it also clears the way for investors to focus on another positive development: the Federal Reserve’s intention to hold off on raising interest rates, a stance the central bank made clear after the March 20 meeting of its monetary-policy committee.”

The late first-quarter weakness experienced by bank stocks, took KBE slightly below its 50- and 200-day moving averages. If KBE can reclaim those technical levels, more upside can be had. Additionally, the fund resides 15.51% below its 52-week high, indicating it can run higher from current levels.

“Now that the yield curve is no longer inverted, investors can focus on the positive message from the Fed. That’s lifting bank stocks,” reports Barron’s. “Stronger-than-expected economic data is helping as well. The Chinese manufacturing sector expanded for the first time in three months during March, and U.S. manufacturing continued to grow at a healthy pace.”