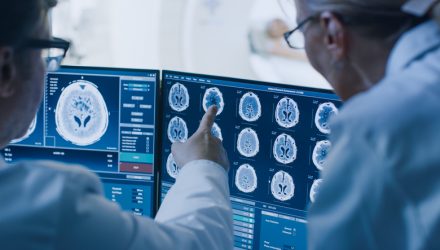 A Healthy Outlook For This Healthcare ETF

There are signs that the healthcare sector, one of this year’s laggard groups, is looking to shed that status. For example, on Friday, just 11 ETFs hit all-time highs and eight of those were healthcare funds.

One of those eight was the Guggenheim S&P Equal Weight Healthcare ETF (NYSEArca: RYH). As an equal-weight ETF, RYH leans away from pharmaceuticals and biotechnology stocks, which are usually the largest industry weights in cap-weighted healthcare funds.

Importantly, healthcare ETFs, including RYH, hit new highs in the days following the latest Democratic debate, indicating political pressure on the sector may be easing.

This year, healthcare ETFs have been dogged this year by speculation that Medicare For All could become a reality if Democrats win the White House in 2020. Many of the most visible Democratic contenders for that party’s 2020 presidential nomination are embracing Medicare For All.

“Investor worries that a Democratic president might usher in a Medicare for All health program that would decimate the role of private insurance and otherwise undermine the sector have clouded the stocks for most of the year,” Reuters reports. “But some of those worst-case fears have been lifting, analysts said.”

However, healthcare stocks, at least for now, have appeared to shake out of the politically-induced doldrums seen earlier this year and RYH’s compelling growth/value mix could prove attractive over the near-term.

Related: Quality is King Thus Far When it Comes to Factor Investing

“Healthcare stocks rallied sharply on Friday after U.S. Senator Elizabeth Warren, one of the top Democratic presidential contenders and a Medicare for All proponent, revealed how she would implement her healthcare plan,” according to Reuters. “It included a timeline that would initially retain many aspects of the current system, including employer-based private insurance while transitioning Americans to the government health plan that currently primarily covers individuals 65 and older.”