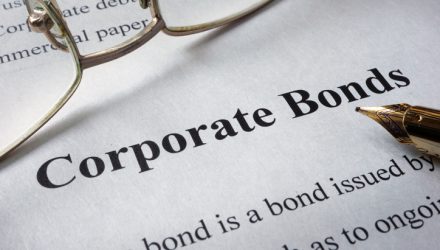 Investors looking for wide-ranging exposure to investment-grade corporate bonds of varying maturities on a cost-effective basis will find a lot to like with the Vanguard Total Corporate Bond ETF (NasdaqGM: VTC).

The Total Corporate Bond ETF acts like a fund-of-funds and will try to reflect the performance of the Bloomberg Barclays U.S. Corporate Bond Index, which includes investment-grade, fixed-rate, taxable corporate bonds issued by industrial, utility and financial issuers.

The VTC Benefits To Enjoy

VCT allocates 51% of its weight to BBB-rated bonds, issues that are one to three notches above junk territory, and while there was some controversy surround BBB corporates heading into 2019, VTC’s price action suggests the market has gotten over that controversy.

“Conversely, other bond market observers argued that the above thesis was probably overblown and noted that the largest issues of BBB-rated bonds are defensive companies, such as financial services and consumer staples. Eight months into 2019, it looks like the latter camp is winning and to the benefit of ETFs, such as VTC,” according to Nasdaq.

The ETF-of-ETFs structure allows investors to gain exposure to almost 6,000 U.S. corporate bonds by taking advantage of the existing exposure and scale offered by the underlying existing ETFs. This approach achieves near complete replication of the benchmark as well as tighter bid/ask spreads and lower operating expenses than investing directly in the benchmark’s constituents.

VTC charges just 0.07% per year, or $7 on a $10,000 investment, making the fund appealing to cost-conscious investors. Speaking of appealing, the Vanguard fund has a 30-day SEC yield of 3.36%, which in today’s environment, is almost considered high. It’s certainly higher than what investors find on the S&P 500 or 10-year Treasuries.

“Even if there is a sudden downturn in the U.S. economy, VTC may be able to endure some of that punishment because many BBB-rated issuers could move to retain their IG status by selling assets, suspending dividends or reigning in other spending to adequately service their debt,” notes Nasdaq. “Plus, revenue growth for many BBB issuer isn’t intimately correlated to U.S. economic growth, according to Goldman Sachs.”

For more information on the bond market, please visit our fixed income channel.