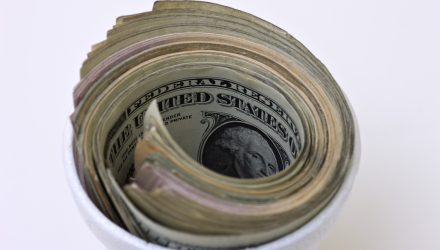 Last week, the Federal Reserve raised interest rates for the third time this year, prompting fixed income market participants to speculate a fourth rate hike will arrive in December and that the Fed will again raise rates multiple times next year.

GIGB tracks the FTSE Goldman Sachs Investment Grade Corporate Bond Index and only holds bonds with at least one year to maturity and a minimum rating of BBB-. GIGB also applies a fundamental screen to measure issuers by operating margin and leverage.

“It owns most of the corporate bonds from the starting universe and weights them by market value, so it should perform similarly to the broad U.S. corporate bond market most of the time,” said Morningstar in a recent note. “However, it attempts to slightly reduce risk by avoiding the lowest-quality corporate bond issuers (the lowest-ranking 10% in each sector). This defensive posture may cause the fund to sacrifice a little return when credit risk pays off. Overall, it isn’t clear that there is a material benefit to this approach.”

GIGB, which is about 16 months old, holds 973 bonds. Among smart beta fixed income strategies, the fund is one of the more cost-competitive names in the group with an annual fee of just 0.14%, or $14 on a $10,000 investment.