You are at:Home»Core Equity Channel»4 Japan ETFs May Be a Bargain Play 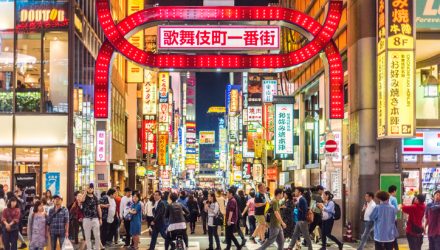 4 Japan ETFs May Be a Bargain Play

As many look around for attractive bargains in the markets, investors may want to consider Japan country-specific exchange traded funds to diversify a portfolio.

According to Citigroup Inc., Japanese markets may be a buying opportunity after the recent slide, even as a potential trade deal with the U.S. was overshadowed by broader uncertainties, Bloomberg reports.

The weaker yen also helped the currency-hedged ETF strategies outperform, with the Invesco CurrencyShares Japanese Yen Trust (NYSEArca: FXY) down 0.7% as the yen currency depreciated to JPY106.14 against the U.S. dollar.

Citigroup strategist Tomochika Kitaoka pointed out that the Japanese markets may follow a similar trend as with other recent pullbacks. Since 2017, the Topix has dipped around 3% after U.S. tariff scares while the yen strengthened about 1 yen per dollar before markets stabilized two to three weeks later. The yen would then sruge to a three-year high before paring gains.

“We expect a modest rebound in autumn as negative catalysts are exhausted and net selling tapers off,” Kitaoka said in a note. “Now is a good opportunity to increase exposure to undervalued stocks with specific catalysts such as share buybacks, as typified by autos and transport equipment given the likelihood of a favorable outcome for U.S.-Japan trade talks.”

The U.S. and Japan have agreed on a trade deal where Japan would cut tariffs on U.S. beef, pork and other agricultural products but continue to face levies on its own auto imports. Japanese officials may consider this a good outcome if their automakers will be protected from further painful tariffs.