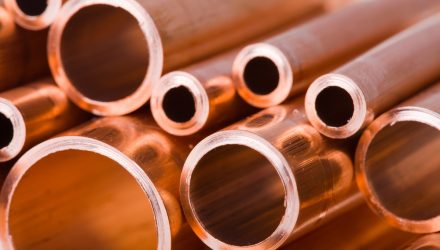 With the Biden Administration aiming for another aggressive stimulus package to lift the economy, investors could be looking at copper and metal-related exchange traded funds to capture the potential demand for raw materials.

Over the past three months, the United States Copper Index Fund (NYSEARCA: CPER) is up 20.5% and iPath Series B Bloomberg Copper Subindex Total Return ETN (NYSEArca: JJC) has been 20.4% higher.

Meanwhile, Comex copper futures are now trading around $3.65 per pound.

While copper prices slipped Friday along with other commodities, the most actively traded copper futures are still 2% higher so far in 2021 and near their highest level since early 2013, the Wall Street Journal reports.

Copper markets have strengthened on strong demand from China and bets that the improving global economy will support consumption of raw materials later this year.

Copper is among the necessary components of construction and is used to build everything from computers to houses. Consequently, the base metal is highly sensitive to shifts in the global economy and the Chinese economy, which makes up the lion’s share of demand – China is the world’s largest commodity consumer and makes up about half of global demand for copper and other metals.

After China more or less contained its Covid-19 outbreak, the economy has returned to positive growth and has been a rare bright spot in the global economy.

Looking ahead, many expect President-elect Joe Biden to raise stimulus spending to counter the damage from the coronavirus pandemic and support spending on projects like infrastructure, which should prop up copper demand.

“Activity in the U.S. and Europe should strengthen, heavily influenced by fiscal stimulus and an opening up of economies,” Bank of America analysts said in a recent note, raising their 2021 average price targets for copper, aluminum, nickel and zinc, and boosting their projection for copper to $3.96 a pound.

Furthermore, Biden’s focus on climate change and adoption of electric vehicles could support demand for metals.

“Given the increased focus on tackling climate change, the focus of government spending will be worth following as decarbonization is bullish metals,” the Bank of America analysts added.