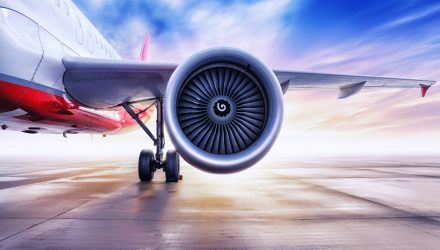 The consumer cyclical sector was booming on Monday, as stocks like Marriott International, the Las Vegas Sands Corp., and airlines were up big as technology stocks fell.

After falling steeply following a quarterly loss of $0.64 per share versus the Zacks Consensus Estimate of a loss of $0.44, Marriott International roared back on Monday, helping to lead the consumer cyclical charge higher, which boosted the Vanguard Consumer Discretionary ETF (VCF) and iShares US Consumer Services ETF (IYC) almost 1% apiece as well.

Marriott shares gained 3.57% Monday, despite poor earnings for MAR, as Covid-19 and other factors wrought havoc on the balance sheet. The quarterly report represented an earnings upset of -45.45%.

The tally of people passing through Transportation Security Administration checkpoints at U.S. airports advanced for another week with 831,789 people on Sunday alone, reaching its loftiest level since March 17. However, TSA traffic is still off by roughly 70% from the same time a year ago, something that is especially challenging during the peak summer months.

“We expect the recovery in demand we’ll see to be jagged,” United CEO Scott Kirby said on July 22. He added that the airline does not anticipate air travel to recover beyond more than 50% of 2019 levels until a vaccine is widely available, something he hopes for by the end of 2021.

Some analysts are also worried about diminishing demand as the summer travel rush fades and the school season resumes.

“As such, we remain cautious on the pace of recovery from here as we head into more off-peak leisure travel periods this fall,” wrote Bank of America analyst Andrew Didora in a note published Monday.