You are at:Home»Featured»Commodities Could Get a Boost from $1 Trillion Infrastructure Plan 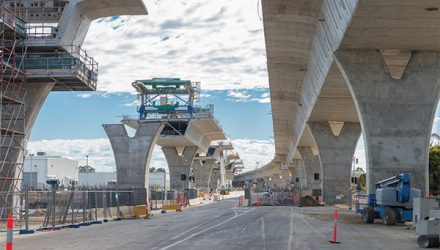 Commodities Could Get a Boost from $1 Trillion Infrastructure Plan

It may be time for investors to take a serious look at commodities and raw materials. A bipartisan $1 trillion infrastructure spending bill cleared the Senate on Tuesday and now awaits approval from the House when members return to Washington next month.

Included in the bill is $550 billion in funding for things most people think of when they hear the word “infrastructure”—roads, bridges and the like. About $66 billion is allocated to rail, $11 billion to highways, $42 billion to ports and airports. Another $73 billion goes toward updating the nation’s aging power grid to include more renewables like wind, solar and hydroelectric.

Should the bill get signed into law, it will help close an estimated infrastructure spending shortfall of nearly $3 trillion over the next 10 years. That’s according to the American Society of Civil Engineers (ASCE), which for 20 years now has scored the overall health of the nation’s physical infrastructure. In 2021, the group gave it a less-than-mediocre C-.

Shares of domestic steel and aluminum producers rallied on the news, with Ohio-based TimkenSteel climbing the most at 11.2%. Nucor, the largest steelmaker in the U.S., finished up 9.6%, while Century Aluminum rose 9.3%.

I believe further gains could be in the works. According to estimates by Citigroup, the infrastructure plan could increase U.S. steel demand by as much as 3 million to 4 million metric tons per year.

Copper producers and refiners could also get a boost, as copper wiring is a much-needed component of wind turbines, solar arrays and other green energy generation projects. Besides funding renewables, the infrastructure bill also sets aside $7.5 billion toward the electrification of public transport and another $7.5 billion toward public electric vehicle (EV) charging stations, which should also boost copper demand.

Also contributing to my bullishness is the potential for inflation to remain elevated in at least the medium term. In July the consumer price index (CPI) increased 5.3% compared to the same month last year, the second straight month that inflation was about 5%. That’s more than double the average annual inflation rate of 2% for the past 20 years.

Inflation can be hard on your pocketbook, but it could also benefit your portfolio if you know how to position it.

Demand for commodities and building materials is surging at a time when global supply chains are still trying to overcome disruptions caused by the pandemic. Couple this with runaway government spending and near-zero rates, and we could see higher prices for some time longer.

Consumers appear to be signaling expectations for a period of sustained inflation. According to the Federal Reserve Bank of New York’s August survey of consumer expectations (SCE), U.S. households anticipate a median inflation rate of 4.8% a year from now and one of 3.7% three years from now. These are the highest readings since the New York Fed became tracking consumers’ inflation expectations in August 2013.

One Simple Way to Get Exposure

Between the possible approval of the $1 trillion infrastructure package and higher inflation, it may be time to consider getting exposure.

One way is with the Global Resources Fund (PSPFX),which has overweighted global renewable energy stocks such as Vestas Wind Systems and Siemens Gamesa Renewable Energy—companies we believe may see some benefit from the infrastructure deal in Congress right now. We also like companies that produce copper, lithium, nickel and other “green energy” metals. Among our favorite stocks are Ivanhoe Mines, Standard Lithium and Nano One Materials.

None of the companies mentioned above were constituents of the fund’s benchmark, the S&P Global Natural Resources Index, as of August 11, 2021.

Thanks to active management and our years’ worth of expertise investing in commodities and raw materials, PSPSX increased an incredible 67.28% for the 12-month period through June 30, 2021, significantly outperforming the benchmark, which rose 48.36%.

Ready to get started? Explore the Global Resources Fund (PSPFX) by clicking the link below!

Past performance does not guarantee future results.

Mutual fund investing involves risk. Principal loss is possible. Foreign and emerging market investing involves special risks such as currency fluctuation and less public disclosure, as well as economic and political risk. Because the Global Resources Fund concentrates its investments in specific industries, the fund may be subject to greater risks and fluctuations than a portfolio representing a broader range of industries.

The S&P Global Natural Resources Index includes 90 of the largest publicly-traded companies in natural resources and commodities businesses that meet specific investability requirements, offering investors diversified, liquid and investable equity exposure across 3 primary commodity-related sectors: Agribusiness, Energy, and Metals & Mining. It is not possible to invest in an index.

Every four years, The ASCE Committee on America’s Infrastructure, made up of 32 dedicated civil engineers from across the country with decades of expertise in all categories, provides a comprehensive assessment of the nation’s 17 major infrastructure categories. Using a simple A to F school report card format, the Report Card examines current infrastructure conditions and needs, assigning grades and making recommendations to raise them. The survey of consumer expectations (SCE) is a nationally representative, internet-based survey of a rotating panel of approximately 1,300 household heads. Respondents participate in the panel for up to 12 months, with a roughly equal number rotating in and out of the panel each month.

Fund portfolios are actively managed, and holdings may change daily. Holdings are reported as of the most recent quarter-end. Holdings are not a recommendation to buy or sell a security. Holdings in the Global Resources Fund as a percentage of net assets as of 6/30/2021: Timkensteel Corp. 0.00%., Nucor Corp. 0.00%, Century Aluminum Co. 0.00%, Ivanhoe Mines Ltd. 5.10%, Standard Lithium Ltd. 2.23%, Nano One Materials Corp. 1.10%.